Problems and Promise in Second Life 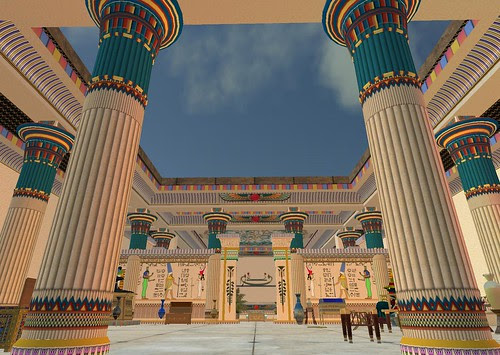 (Update: Since writing this post, I have launched a company which is dedicated to helping people understand complicated technologies and concepts. Besides creating online posts which address questions such as What Is Dropbox and What Is Google Drive, I have also published a series of guides under the In 30 Minutes brand.)

By most accounts, Second Life seems to be doing quite well. The simulated 3D world recently passed a major milestone: 1 million users. There is a thriving virtual economy (or bubble economy, as the case may be), based on the trade of US Dollar-exchangeable "Lindens" for virtual goods, services, and real estate. Meetings take place in Second Life, such as this virtual press conference that former presidential hopeful Mark Warner gave earlier this year. There are some very impressive design and educational projects taking place, such as Aura Lily's project (pictured at the top of this post) to recreate the artifacts and architecture of ancient Egypt (click here for more pictures and a description)

Nearly everyone from the mainstream media seems to be going bonkers over Second Life, judging by features like this one in Business Week. Some well-known bloggers have been gushing as well, such as Robert Scoble. There are more than a few, however, who are skeptical, such as ZDNet's Larry Dignan, who is taking Sun to task for having a Java developer Q and A in Second Life. Others are convinced Second Life is a scam.

I finally had a chance to give Second World a spin today. I registered and entered the virtual world for the first time, in order to prepare for a virtual seminar taking place at the Harvard Berkman Center tomorrow, featuring Rebecca MacKinnon discussing journalism education.

But after trying out Second Life, I've come to the conclusion that it's not ready for prime time. The basic concept is sound, and there is potential for great things to happen here, but there are a lot of things holding it back. They include:
I am not going to get into these issues too deeply here. The tech requirements basically entail having a relatively modern computer with a graphics card, and a fast network connection. If you're using a five-year-old laptop and a weak wireless connection, forget it.

The credit card requirement may not seem like a big deal, but believe it or not there are a lot of people who don't have credit cards, including a sizable chunk of the demographic that would be most likely to be attracted to Second Life -- teenagers and young adults. Related to the use of the credit cards are the constant reminders in Second Life of the extra services and things for sale. It's hard to escape, and is more than a little irritating.

But the biggest obstacle to Second Life taking off is the learning curve involved. If you are not 'Net savvy or game savvy, be prepared for a very frustrating experience. Linden Research (the creators of Second Life) have done a good job simplifying the code of conduct and creating a "beginners island" which contains exercises for new users to practice movement, communication, and other activities, but there are way too many other things to trip up or befuddle new users. For instance, movement in Second Life is like playing a primitive first-person shooter on an old piece of hardware -- awkward and jerky, and requiring lots of corrections with the keyboard commands. The user interface is terrible. Second Life basically takes the Windows approach to UI -- lots of menus, buttons, taskbars and options for customization -- instead of the Google approach to UI, which emphasizes simplicity even in fairly advanced tools like Google Maps. "Help" resources can be hard to find. And Second Life's search function is a disaster.

Unless these problems are addressed, there is no way that Second Life will appeal to the vast majority of Internet users. There are a couple things that Linden Research could do to make it easier for new users, such as eliminating excess or redundant options, getting rid of the credit card requirement, and having users create their default appearance at the time of registration, instead of on their first visit to Second Life. These would boost the number of first-time users and return visitors, and would give Second Life a much better leg up on future competition, which will likely come from established virtual environments based on massive multiplayer online videogames.

As for tomorrow's 3D seminar at the Berkman center, I am not sure if I am going to make it. After my experience today, I am not sure I am willing to put up with the hassle, especially considering a video of the event will be posted online later.