Henry Rollins on creativity and writing 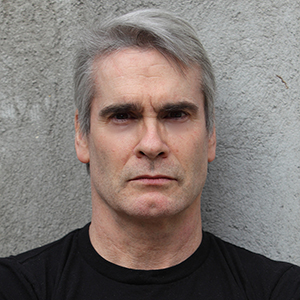 There's an interview with Henry Rollins that writers and other creative people should read right now. If you were into punk and underground rock in the 1980s and early 1990s, you know Rollins from Black Flag and Rollins Band. Others might recognize him from a string of bit parts in TV shows and movies including Heat, The Chase, Johnny Mnemonic, and Sons of Anarchy.

In this interview, he mainly talks about writing. He has produced poetry, spoken word, and a memoir in the past, but it's not the content he's talking about, but rather the process of getting it out. It's very inspiring, and worth quoting here:


if somebody ever says, “Well, what do you do about writer’s block?” I’m like, “I don’t think I’m a writer.” I don’t put any of those titles on myself, so I don’t acknowledge those pressures. Some days I got stuff, some days I don’t, and some days I write about the fact I got nothing to write about. But, I do try to write 1,000 words a day. It’s just like going to the gym. Some workouts are better than others. I think the less pressure you put on yourself, the better. In my opinion, it’d be hard to sit in a room and go, “Okay, damnit. Be creative.”


The power nap is very instrumental in what I do. I take like one or two four to seven minute naps a day. I can sit in the chair in my office right in front of my computer and knock out for a solid four to six minutes and then wake up like “boom!”… Usually at the end of the day, I’ll do another one of those right before I work out. I can skip it, but I feel groggy on the treadmill if I don’t.

if I’m awake, I need to be doing something. Even if it’s nothing, I’m working in that nothingness. I usually have a notepad on any flat surface where I am because there’s always a note to take down, an idea to come up with, a thing to do later. I’m rarely doing nothing.

That’s why I don’t have a TV. Because I will watch it. I know I’m susceptible....

I think it’s important if you’re a creative person, or aspire to be, that you don’t spend too much time aspiring or asking advice. Just get going and address what’s roaring inside you.


On his own work:


When something’s done, I’ll go, “Okay, cool,” and I’ll shelve it, and I’ll rejoice that the damn thing is done and my desktop is empty so I can fill it with the next project. I’m a shipbuilder. I don’t want to sail in them. I want you to sail in them. I’m just happy that they leave the harbor so I can have an empty workplace. And the glee of getting the component parts and starting from scratch starts all over again, and we build the next ark.


On aging and output:

Someone once said that when you buy a book, you’re not really buying the book—you’re buying the time you think you’ll have to read it. It’s like all those records you say you’ll listen to some day, but that day never comes. 50 finds you real fast. Like, you’re 28, and all of a sudden, you’re 50. It happens so fast. And that “woulda, coulda, shoulda”? You better do it while you still have knees. You better do it before you start getting up and everything pops and clicks because, man, it changes....

I always have like five books going at once. That anyone will read them, that’d be cool. But I’m not making them to get read; I’m making them to get them out of me. You gotta do something with your life. You can watch TV. You can inhale cocaine. Or you can sit down and write, or sing, or jump up and down, whatever it is. It’s all just choices. So much of this is just committing to the time and the discipline and the agony of creativity—because it turns on you all the time.

What a great interview. It's long, but it's worth reading through and savoring. I especially like that "shipbuilder" quote. But I hate to say that I don't know much of Rollins recent work. My main touch points for Rollins are his music and some of his spoken word stuff from the 1980s; I did not know he has continued his high rate of creative output to the present time (I had a vague idea he does radio stuff but I don't follow it). I will try to make a point of reading some of his books in the near future (if I can make the time ...) (Edited to add: He has literally scores of books on Amazon. Incredible!)

One point of context that's worth mentioning: In the early 1980s he was part of one of the most prolific small teams that ever existed in the music industry: Black Flag (Rollins, guitarist Ginn, drummer Bill Stevenson and bassist Kira Roessler) and their producer "Spot." From 1984-85 they released four full-length albums and toured incessantly. Even after the band broke up the individual members continued to produce, produce, produce. Rollins started Rollins Band and did poetry books and spoken word tours as well. Ginn ran SST records and did some other bands. There's a documentary about Bill Stevenson which shows how he kept up this crazy pace with ALL and Descendents and other recording projects to the present day. Roessler was part of a sound editing team that won an Oscar for their work on Mad Max: Fury Road. These people are incredibly prolific and creative in their own right, and when they came together it was a very intense period of output.

Anyone who is interested in the history of Black Flag and other seminal creative teams of the alternative/underground music scene of the 1980s (Minor Threat, Mission of Burma, The Replacements, Fugazi, Minutemen, Big Black, Sonic Youth, Dinosaur Jr., Butthole Surfers ...) should read Michael Azzerad's Our Band Could Be Your Life. He conducted some solid research and got many of the key players to talk to him, and the book is a great read. He made an observation that these bands were in many respects entrepreneurial ventures, albeit operating with only creative capital and bootstrapped energy. Quoting from Azzerad's interview with The Paris Review:


The most lasting significance of the eighties American indie scene might have been the way these bands conducted their careers. The point wasn’t to play loud and fast; the point was to make the music they wanted to make, without compromise, to find and cultivate an audience for it, and to live within their means so they could continue to do exactly what they wanted to do and not be beholden to anyone but themselves. That’s really what the best indie bands today are emulating.