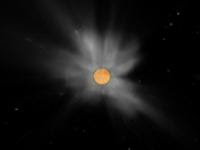 The New York Times reports that NASA and researchers from the military and academia are launching a pair of scientific satellites that are designed to get a 3D view of the sun:


Carrying 16 instruments each, the satellites are to help scientists predict the billion-ton eruptions of electrified gas and deadly particles known as coronal mass ejections that cause the Northern Lights and can disrupt power grids on Earth.

The mission, called Stereo, for Solar Terrestrial Relations Observatory, is the first in which the National Aeronautics and Space Administration will use the tug of the Moon’s gravity to send spacecraft to their final orbits.

This mission potentially has real-world benefits. It will let researchers better understand potentially destructive solar phenomena. Potentially, this could lead to technologies or strategies that can better protect power equipment, spacecraft, and astronauts.

The STEREO project website further describes the mission. There is also a multimedia page, which includes a 3D animation of a coronal mass ejection (CME). Once the satellites reach solar orbit, they will begin to provide 3D imagery of the sun and CMEs.
Posted by I Lamont at 10/30/2006 09:28:00 PM

Email ThisBlogThis!Share to TwitterShare to FacebookShare to Pinterest
Labels: 3D