My online math class review: Convenience gets an 'A,' but at what cost?

So I'm going to business school. It's an intense, full-time, on-campus program at MIT Sloan. However, before school started, a handful of us who don't have science, finance, or engineering backgrounds were asked to take an online precalculus course at another institution. This post serves as an online math class review. The online math class was taken at the University of California Extension School.

Why take an online math class before going to business school to get an MBA? It's an understandable requirement. Our business school curriculum has a very strong quantitative component. Using a scientific calculator and Microsoft Excel is required. Microeconomics, accounting, and data analysis are math-heavy subjects, and even the instructor for the core marketing class has illustrated theory with mathematical equations.  To give you an idea of the types of questions I'm dealing with, here's an example from the practice microeconomics exam:


You have a patent on a drug that has been approved for sale in the U.S. The U.S. demand for this product, for which you are the monopoly producer, is

where Q is millions of tablets sold, P is the price per tablet, A is expenditure on advertising, and ln denotes a natural logarithm.

If you are maximizing profits, and if the marginal cost of a tablet is $0.90, what price should you charge?

That was actually one of the easier questions using a standard economics equation with price, marginal cost, and elasticity variables. The more difficult ones involved transfer pricing and monopoly pricing, which use calculus. Moreover, I'm in the room with bankers, scientists, engineers, and others who have used math in their day-to-day careers. Even if you don't have this type of professional background, everyone has to be able to keep up to get the most out of the curriculum, and maintain an intelligent and productive level of discussion with classmates and faculty. 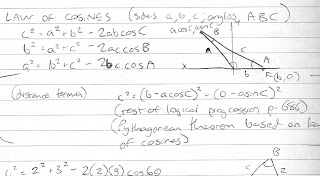 So why not stick with the concepts covered in the GMAT, which is intended for people heading to business school? While GMAT test preparation concentrates on algebra and geometry basics, it's basically 7th-grade math. Precalculus goes beyond typical GMAT review topics, and in my opinion, the  advanced math review is more appropriate for business school. For instance, in my microeconomics class, we had to deal with logarithms and graphing supply/demand curves -- two areas which were *not* part of the Barron's or Kaplan GMAT review, but were covered extensively in precalculus.

Online math class review - what the curriculum was like

The online precalc class I took was not through MIT, but rather through a well-regarded public university's continuing education division -- specifically, the University of California at Berkeley Extension School. The class has been in existence since at least early 2006, and during that time has apparently been taught by the same instructor.

On the class bulletin board, I noticed that there were other students from UPenn/Wharton, the University of Chicago, and NYU who were taking the same class before starting their respective MBA or masters programs. The precalc class was a for-credit course, but the credit will not be transferred to MIT. The main purpose of taking the class was to ensure that we come prepared for some of the concepts and exercises that are now being thrown at us, as opposed to checking off a math credit.

So, how was the class?

The curriculum was standard. It started with a basic algebra review, went on to quadratic equations and graphing, spent a few chapters on functions, and ended with three or four chapters on trigonometry. There was one chapter on logarithms, too.

The convenience was great. We could go at our own pace, and start at any time during the year. Beginning in April, after putting the kids to bed, I would go downstairs to the living room to spend about 2-3 hours on readings and homework, and about every week, the chapter tests. I never had to deal with driving. Homework and tests were completed online. I was able to make very steady progress, with the aim of completing the course by the time my full-time MBA program started in Cambridge in early June. I was able to finish the required chapters in about two months and take the proctored final exam in downtown Boston the day after Memorial Day, just a few days before heading to MIT.

I worked very hard at the online precalculus class, and did very well in the homework, tests, and final. Most importantly, I feel that I learned a great deal and came to business school well-prepared. The value of taking precalculus was very apparent in the on-campus microeconomics class, which had a substantial math component. The online math preparation allowed me to focus my attention on economics theory, instead of getting hung up on the calculations in the problem sets.

But there were drawbacks, too. For years, I've heard criticisms from other students, faculty, and even supporters of Web-based distance education, relating to a lack of interaction between students and faculty. I can verify that this was indeed the case in the online class that I took. Here's what observed:
In summary, my online math class review found that taking the class basically boiled down to being taught by a textbook, and getting university credit for it, from one of the top-ranked public universities in the United States. I use textbooks in my real-world classes too, but the big difference is the classroom sessions include a huge amount of discussion and focused questions on difficult topics, examples, and other areas worth exploring as part of a shared dialogue. In the online math class, there was almost no meaningful student/teacher or student/student interaction. To equate this type of online learning with a real-world classroom experience is a major stretch.

Further, struggling students tend to suffer in an environment when teachers aren't there to help, or even notice there's a problem. I wonder how many dropped out of my class, after attempting to make contact on the online message board, or getting hung up on the software? In the absence of any monitoring system for the exams and homework, how many have turned to cheating?

On the other hand, the convenience of taking a class at home was addictive. It was very easy to incorporate these classes into my home life, without dealing with wasting time or money on commuting to class. And, most importantly, I learned what I set out to learn.

Would I take an online class again? Maybe, if the topic lends itself to rote memorization and hands-on problem solving that does not require interaction with other students or faculty.

But for most college- or university-level subjects, online education is a poor substitute. In my opinion, the most effective learning takes place in the classroom, where you can easily raise your hand, engage in spontaneous discussions with classmates and faculty, turn to the person next to you to ask for clarification, or approach the professor after class or during office hours to ask questions or exchange viewpoints in a way that practically guarantees an instant response and is not constrained by typing, software interfaces, or waiting for a response.

To give you an example, in my on-campus microeconomics class, I suspect that about 3/4 of us were partially or fully baffled during our professor's first explanation of concepts like two-part tariffs and double-marginalization in certain transfer pricing scenarios. The only way we were able to "get it" were by some students raising their hands and asking the professor to explain a particular element, other students sharing their own experiences from their careers (with responses from other students or the professor), and the problem sets being explained in person by the TA, with more questions from us. Not everyone raised their hands or participated in the debates, but everyone in that classroom heard them, and learned something from them.

I doubt 10% of this interaction would have been possible online, even using technologies that allow instant feedback from remote students -- it's too easy for people to multitask, read email, or browse the Web while attending class, and unless sophisticated two-way video systems are involved (such as telepresence), it will be difficult for faculty to get important visual feedback cues from the students they are teaching.

A decade from now, there may be better technologies that truly bring the shared classroom experience to people's homes, but the asynchronous, Web-based technologies that seem to dominate the online education sector don't come close to the real thing.
Posted by I Lamont at 7/17/2010 08:22:00 AM