Robots and politics, or would the real candidate please stand up?

(See updates at bottom of post) It's campaign season in my corner of the 'burbs, and the mayoral candidates are pulling out all the stops to make that all-important personal impression upon voters like me.

But I have to hand it to one of the hopefuls, Setti Warren. Not only is he the only candidate to ring my doorbell to personally introduce himself and his platform, he is also the only one who is apparently fully ambidextrous, as shown in the two postcards I received from him today: 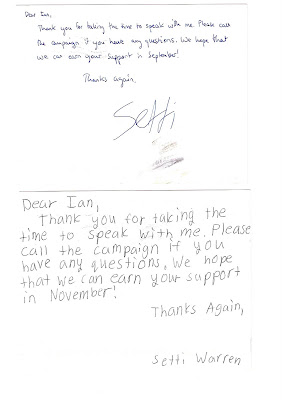 I jest, of course. It looks like Setti's effort to craft a personal response was slightly botched by a pair of young campaign helpers working from the same distribution list and almost the same script (one asked for support in September, and the other in November).

Wouldn't it have been much easier and authentic to simply print out a postcard and have him sign them in his actual hand? Or, if a personal touch is absolutely essential, why not use technology to solve the problem, like this:
This machine may seem silly, but I have seen similar devices used in the higher education sector to solicit alumni. It's not a stretch to imagine them being used in political campaigns in which candidates simply don't have the bandwidth to personally sign hundreds or even thousands of pieces of election-related communications.

Our Founding Fathers surely never foresaw robotic pens and robocalls making an impact on our political system, but then again, they surely didn't anticipate other technological innovations such as whistlestop tours, loudspeakers, and television.

8/4/09 update and note to readers: This post is not intended as a criticism of Setti's platform or other campaign practices -- as I pointed out yesterday, Setti is the only mayoral candidate to visit my house in person so far. He actually spent about five minutes on my porch answering a question I asked about city hall. I also have a great deal of respect for his service in U.S. Navy Reserves, which required him to take leave of his family and life in Newton a few years back when he was called to active duty.

So, if you want to leave a comment, please be polite. And remember that in the grand scheme of Newton politics, having campaign staffers write and sign personal thank-you notes ranks very low in terms of importance to what I consider to be real problems impacting the city -- such as terrible long-term fiscal planning, crowded public schools, and the unmonitored use of scores of city vehicles by civil servants who live outside of Newton.

Second 8/4/2009 update: The Newton Tab explained what happened, after talking with Setti. He did sign one of the cards, apparently.

Update #3, 8/4/2009: Matt Frank, commenting over on the Universal Hub thread about this incident, gives a name to the device in the video above and confirms that it is indeed used by politicians:


The machine Ian refers to is in use by the big leagues already. Many campaigns just do the elevated print but down in DC it is not all that uncommon for Congressmen to have an "autopen" that is there for signing items and response letters to people back home.