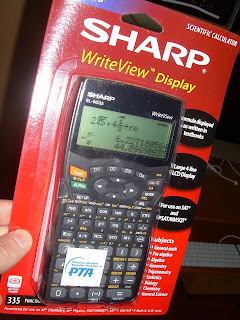 I suppose if you post a photo of a calculator to your blog, that officially makes you a geek. This Sharp EL-W535 WriteView scientific calculator

was the one that I used for the second half of my precalculus class. It blew away the iPod touch's

built-in scientific calculator which I used for the first half. The Sharp can display three or four lines, which means complex fractions fit onto the screen. There are a bunch of memory functions, the ability to scroll through a log of recent equations and answers, and instant conversion between decimal and fractional values for real numbers. Best of all, the price: Less than $15 on Amazon