Most of my videos on innovation have focused on MIT technologies and research, but this week I thought I would highlight an example of successful innovation involving real estate and community. On the outside, the Kam Man (金門超市, or "Golden Gate Supermarket" in Chinese), located on Quincy Avenue in Quincy, Massachusetts, may not look that special -- an Asian supermarket located in an old strip mall. But there are a few things that make its business model unusual and ultimately successful. They are: 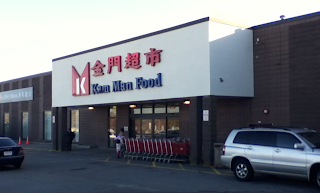 My video report below shows some of the cubicle businesses and what the interior of the structure looks like. At the bottom of the post, I have some additional observations:


While the harsh flourescent lighting and scuffed linoleum of the old Bradlee's may not seem inviting, the model is clearly working: The parking lot of President's Plaza was filled to capacity, and most of the cube space was occupied. We saw many other customers doing the same thing as our family -- start with lunch at one of the small restaurants in the plaza, move on to shopping at the giant supermarket, and then browse the other businesses in the marketplace. There is turnover among the cube businesses, but some (such as the Lollicup shake tea) have been around for a few years, and the basic subletting model with Kam Man Food as the anchor has lasted since being established in Quincy in 2003.

Is it a model for the thousands of other Wal-marted strip malls scattered across the country? Unfortunately, the answer is probably "no". Most cities are already served by supermarkets, which makes it much harder to get the anchor tenant up and running. That leaves underserved ethnic communities of a sufficient population and lack of nearby alternatives. Having a relatively close distribution network is also key -- New York City is just a four-hour drive from Quincy, meaning some of Kam Man's trucks and suppliers could be extended into Massachusetts.
Posted by I Lamont at 11/12/2010 09:59:00 AM