So I've been in Saigon, Vietnam, for less than 12 hours. I've seen the streets at night, during the ride from the airport, and also this morning, when I took a 30-minute stroll around the residential neighborhood where my hotel is located. 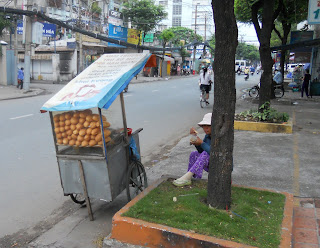 So far, street life reminds me a lot of southern Taiwan -- small cities like Tainan (台南）or Jiayi (Chiayi/嘉義). The buildings look the same, there are a huge number of scooters, and the people look very similar. Street vendors are everywhere, mostly selling food (including some Chinese items, like giant steamed dumplings/包子) but there are also touches of Vietnam's French colonial past -- I spotted several vendors selling French-style baguettes (see inset photo).

I am also going to be taking a close look at the media scene while I am here. Here's what I  tweeted this morning:

Here is some video from the walk this morning. Note that the traffic increases by about 10x by 9 am: