Spotted on a Saigon storefront in district 1, in the week before Tết, a sample of Vietnamese calligraphy: 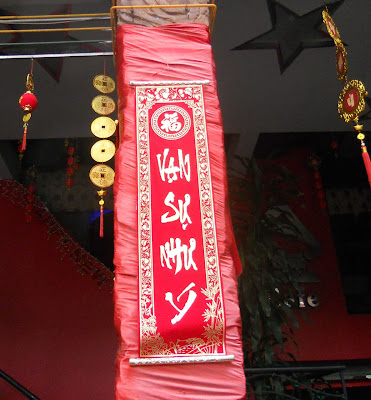 Doesn't look much different than what you'd see in Beijing or Taipei around this time, right? A four-character blessing for a happy and prosperous new year.

Except for one thing: Aside from the pictogram in the circle, those aren't Chinese characters. They are calligraphy in Vietnam's quốc ngữ alphabet, which is based on Roman letters and Portuguese. The text reads "Vạn Sự Như Ý", and corresponds to the Chinese phrase 萬事如意 ("May 10,000 things go according to your will"). 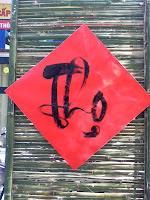 The Vietnamese alphabet was developed by Jesuit missionaries in the 17th century, and replaced the Chinese-based character system called Chữ Nôm that was once used for written Vietnamese. Even though the quốc ngữ alphabet has been used for centuries, the Chinese influence is still strong, thanks to Vietnam's and China's shared cultural heritage and long historical association. The sharp corners on "N" and "V" in the example above help differentiate it from Chinese characters, but I've seen examples of Vietnamese calligraphy that so resemble Chinese "grass script" calligraphy (草書, sample here) that the Roman letters are nearly impossible to discern.

As for spoken Vietnamese, I spent about a month listening to Pimsleur Vietnamese CDs before coming to the country, in order to get a feel for the language. Now that I'm here, it's interesting to hear the similarities between Vietnamese and Chinese. Both are tonal languages (four for Mandarin, five for Vietnamese). Vietnamese also employs measure words, which are called "classifiers" in the Vietnamese dictionary I use.

In addition, I've noticed that the two languages have certain words that sound very similar, and I can't help but wonder if Vietnamese borrowed some terms from its neighbor to the North. Some examples include the terms for America ("Mỹ" in Vietnamese and "meiguo/美國" in Chinese) and electricity ("điện" in Vietnamese, "dian/電" in Chinese).

French has also had an influence on spoken Vietnamese. I hear it all of the time in words for food, beverages, and some technical terms: wine ("vang"), chocolate ("sôcôla") and cake (sometimes listed as "ga to").

As for the English influence, I heard an interesting admission from several Vietnamese friends: They use English for business emails and certain terms. Why? "Because it's more direct" and they don't have to worry about how to properly phrase the Vietnamese, which apparently can vary significantly depending on the relation or stature of the recipient.
Posted by I Lamont at 1/24/2011 01:30:00 PM