You may have heard of it before: MIT's Infinite Corridor, which runs more than 800 feet from 77 Mass. Ave, through four or five buildings in the classic campus, before emptying into a large courtyard that overlooks the giant earth sciences building designed by I.M. Pei in the early 60s (It's also possible to continue east indoors through a connector to another long hallway that leads to the chemistry department and Ames Street, but that extension is not as fun as the Infinite Corridor). 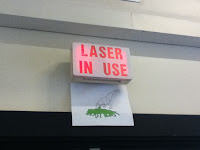 The corridor has been used for physics experiments and to observe other phenomena (for example, MIThenge) but I find it to be a great place to see a cross-section of daily life at the institute, from student activities to working laboratories. For instance, walking eastward down the corridor through the war memorial room in building 10, I recently happened across some sort of gaming club that built steampunkish robots and dressed up as Japanese video game characters. Last week, on the way to the Stata Center for the Jason Pontin/Bill Joy talk, I noticed flashing signs over a room just off the eastern end of the corridor warning of laser testing inside. These are just a few examples of the things that always seem to be happening in and around the lengthy corridor.

The video I ended up shooting below shows a walker's view of the Infinite Corridor last Thursday afternoon, from 77 Mass Ave. to building 8 and a view of the earth science building. Total time: Just over 3 minutes: