Every once in a while an invention comes along that changes the way people live their lives. Computers, mobile phones, television, washing machines and cars are but a few examples. I'd like to add to the list robot vacuum cleaners ... specifically, the iRobot Roomba Model 530 that we got last month. It has changed the way we do housework, and has really freed up a lot of time for us to do other things.


Why buy a robot vacuum cleaner?

A lack of time was the reason we got the robot. I have been cranking away on starting a new company producing a classifieds app and simply don't have the bandwidth to vacuum the house every week, and neither do other family members. I had heard about the Roomba for years but never considered buying one, owing to the expense and the fact that one of us usually had enough time to vacuum every week using a 15-year-old Sharp upright model. But when we both began new careers, the problem suddenly presented itself. Around the same time, I saw a brief side-by-side review of three robotic vacuum cleaners by America's Test Kitchen, and noted that the prices were coming down. I did some additional online research, and decided on the Roomba. 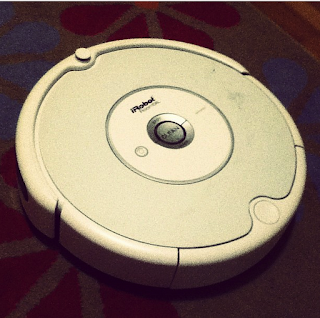 We put it to work right away. The results were impressive -- it cleaned up our bedroom, even getting underneath dressers and night tables, in less than 30 minutes. It got into corners and redid each spot multiple times, resulting in lots of debris in the dirt and dust traps. Next was the bathroom and hallway, and then the kids' rooms, and finally the downstairs area, including the kitchen. We have mostly hardwood floors throughout the house, which really suits the Roomba, although we've noticed it takes care of medium-sized rugs as well.

The greatest thing about the Roomba is it's pretty much fire-and-forget. You spend a minute or two prepping the rooms to be cleaned (moving toys out of the way, putting up loose electrical cords, shutting doors where you don't want the robot to go) press the button on the top, and let the robot do its thing. It seems to be moving randomly, but there is a method to its cleaning path, driven by trigonometry and some sophisticated algorithms. It's actually a great feeling being able to work in one part of the house while hearing the Roomba whirring away. Yesterday we even went out shopping and left the Roomba to clean the whole downstairs. When we came back the floor was clean and the robot had automatically returned to its charging station.


Roomba vs. vacuum cleaners: What are the drawbacks?

Are there drawbacks? Sure. One thing that some people will hate is having to clean the robot. Unlike a standard vacuum, which only requires changing bags or shaking out a dirt trap every now and then, the Roomba requires regular maintenance that contains about a half-dozen distinct tasks. You have to manually empty the dirt and dust traps (typically after a large room or the entire floor) and periodically unscrew the brush and rollers to remove tangled hair and dust. It doesn't take long, but it's dirty (with pets it would be even worse). It is also absolutely necessary to keep all of the parts moving.

There are some other minor irritants as well. It can get stuck on high barriers or under furniture that has hanging springs or rods, like our sofa bed. Cords and strings can mess it up. One time it brought down a heavy plug that I had placed on a table. It landed on top of the robot and shut it down, but there was no permanent damage (the robot is actually pretty sturdy). Another time I had to shut it down just before the end of a long string of yarn got swiped into its brushes. You can buy electronic barriers to keep it out of certain areas, but I've found the range on those are only about 10 feet, which means it can get around them if you're trying to block off part of a big room. As an alternative, I sometimes lay chairs on their sides to stop the robot from passing certain areas.

But overall, the Roomba is a remarkable invention. It's a huge timesaver. I estimate it saves us about 5-10 hours of labor per month. The cost is comparable with many upright models -- less than $300 when we bought ours. And while the maintenance is a minor pain, it's worth it.
Posted by I Lamont at 1/03/2012 10:24:00 PM