Feiwu/廢物樂隊 interview: From Taiwan Beer to Cuckoo For Coco 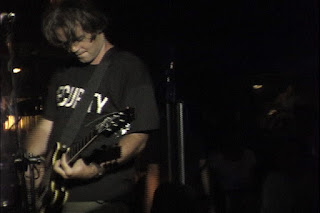 My old band, Feiwu, got written up in the Taipei Times in advance of our February 17 show at Taipei's Legacy club. The article is here (scroll to the bottom of the first page, the interview continues to page 2). The reporter was limited in the material from the interview that he could use, so I've decided to post the rest of the interview here.

Taipei Times: The song I Love Taiwan Beer ~ how did you come up with such a thing!? does the song have an official English name? What year does it date to?

Ian: The song 我愛台灣啤酒 ("I Love Taiwan Beer" or the "Taiwan Beer Song") dates to 1997. It's our most well-known song. It really resonated with fans, and some local bands still cover it today. The studio version is the lead track on our first CD 物以類聚 ("Birds of a Feather"), but we also have a really good live version on the second CD 跳火圈 ("Ring of Fire").

I wrote the music and Mandarin lyrics one night, sipping brew from a blue and white can. I brought it to the other guys for the next practice and they picked it right up, and added some nice touches, too. The influences, besides the beer? I was really interested in "nakashi" music you'd hear in local stores and restaurants, taxis, and other places. At the same time, some of the other underground acts around us like LTK and Clippers used Taiwanese or Taiwan themes in their music, which was a very sharp contrast to mainstream Mando-pop that dominated the music industry. I can't speak Taiwanese, but I could write a simple nakashi-influenced guitar melody and sing in Mandarin about something that was very characteristic of Taiwan -- the local beer! I was also heavily influenced by punk and hard rock. In the 1980s had seen a lot of live club performances by bands like Bad Brains, Fugazi, Suicidal Tendencies, Rollins Band, as well as local Boston bands. I think you can hear that hard edge in the loud part and gang chorus of "I Love Taiwan Beer".

Some surprising cultural and musical connections started popping up the more we wrote and played and learned about Taiwanese and Chinese music. For instance, nakashi was actually related to a Japanese style of country music, and was present in Taiwan thanks to the Japanese colonial and cultural connections. I also learned that one crowd favorite we played, a Ramones style cover of Grace Chang's 我要妳的愛 ("I want your love"), was in turn a cover of an American R&B hit from the 1950s called "I Want You To Be My Baby".

Another Taiwan/American musical connection: Before Spring Scream '98 I decided to write a surf instrumental in the vein of "Pipeline" or "Apache" that we could play at the festival. This is when Spring Scream was still by the beach in Kenting. The first time I played it for the guys during practice, our drummer Steve Tsai said, "布袋戲!". This was the Taiwanese puppet opera that is performed live, and was later ported to Taiwanese TV. I didn't understand the connection at first. But Steve explained that the soundtrack for some broadcasts was none other than American surf instrumentals from the early 1960s. We immediately dubbed the song 布袋戲, and gave it the English title "Puppetmaster" (nod to Metallica!). It's on our first CD, 物以類聚 ("Birds of a Feather").

Taipei Times: What do you know about the legacy of the Taiwan Beer song? any TV commercials? use in film or TV? radio? other? did Taiwan Beer ever contact you, comment or acknowledge it in any way?

Ian: Funny you should ask. We just found out that Legacy Taipei has worked out a promotion with Taiwan Beer to provide free beer to ticketholders at our February 17 show. The company is supplying something like 900 beers. Another reason to go to the show! It's actually the first time in 15 years that Taiwan Beer has done something like this. Until now, we didn't know for sure if anyone at the brewery was even aware of the song.

To my knowledge the song was never used in TV or film. But when we started performing it, audiences really took notice. It really resonated with people. Even before we released the first CD, people at our shows knew the melody and chorus and would sing along ("台灣啤酒很好喝，台灣啤酒喝完了。台灣啤酒三十塊,台灣啤酒我最愛").

Taipei Times: What was the song about Coco Lee? and the scandal? somehow i cant remember....

"Cuckoo for Coco" was a song on the second CD, 跳火圈 ("Ring of Fire"). It appears twice, once in Mandarin and in a secret track at the end of the CD that's in English. Andrew wrote the music and the original English lyrics, which have nothing to do with Coco Lee -- it's an homage to breakfast cereal! I wrote the Mandarin verses, kind of a twisted ode to Coco and her ubiquitous media presence at the time. She was overexposed -- songs, TV appearances, commercials, magazines … it was inescapable. The Mandarin lyrics are a love letter from an obsessed foreign fan who wants to get closer: "我聽說妳在國外長大，跟我差不多。 來到台灣你很出風頭，我要作朋友" ("I heard you grew up overseas, just like me. You came to Taiwan and entered the limelight … Let's be friends!")

Our bassist, Bob Hsiung, and guitarist Andrew Watson, heard that she was interviewed on a radio station and they asked her about the song and even played it for her. She apparently said she was "flattered".

Taipei Times: What year was the band formed?

Ian: Spring of 1997. Bob and I had been in another band called The M9s from 1995-1996. We wrote mostly in English and played at a few clubs around Taipei -- and actually after one of our shows I met Steve Tsai, who had been a drummer for Sissey Zhao. The M9s broke up after I went to China and Southeast Asia for six months. By the time I returned to the island in early 1997, Bob was already playing in another band, Smut, which had a lead guitarist named Andrew Watson. They broke up right after Spring Scream '97, so the three of us decided to get together with Steve Tsai for a jam session in April. It clicked, and the band was born. After I left Taiwan in 1999, the Jojoe Huang joined Feiwu as a second guitarist.

Taipei Times: What bars or clubs did you play in most often?

Ian: Feiwu was a regular at Vibe for a few years. We played there more than a dozen times.

Feiwu's first gig was at a place in Taipei called Witches. Steve set up the show. We performed practically everywhere else in town that would let us play, including Underground and one of the Roxy clubs on Shida Road. We also appeared at alternative venues like department stores, parties, universities, and once under a highway overpass near the Grand Hotel (that gig was set up by some TAS kids in the band Nipple).

Feiwu also began playing elsewhere on the island -- every Spring Scream from 1998 to 2001, plus other festivals. I have an old T-shirt from something called "Shroom Festival". That took place in 1998 on a rooftop in an industrial area outside Taichung. It brought together a bunch of underground bands, plus club music later in the night. We played bars in Taichung and in the far south … I remember once having a club owner in southern Taiwan rip the plug of our amp out of the wall after we started playing. He was expecting "Lemon Tree" or Air Supply covers or something lightweight ... instead we played distorted guitars and wicked fast drums.

One thing that's worth mentioning was Taiwan's underground music scene had reached a critical mass by that time. There were underground bands doing their own music in the 80s and early to mid 1990s, but their efforts were isolated. Around 1996 or 1997 that changed. There were finally enough local bands writing and recording their own music, including LTK, 董事長, 1976, 瓢蟲，私分街，啊德， 甜梅號， 夾子，Chthonic, Sticky Rice, and 海豚. There were also enough fans to support live music performances. I think Spring Scream, and Ling Wei's clubs like Vibe and Roxy Plus were very important for giving new bands opportunities to perform, develop original material, and connect with fans. Once that critical mass was reached, the music was there to stay.

Taipei Times: You were weekend editor at the China News, correct? Where has your career taken you since?

Ian: Yes, my day job was weekend editor at the China News. The pay wasn't much, but it was a lot of fun working with some great writers, translators and photojournalists covering local culture, arts, food, music, film and travel. It would take a long time to explain all of the twists and turns since then, but I came back to Boston in 1999 and made a career in digital media. I also went back to grad school full-time to get a business degree from MIT. Since then, I have started my own ebook publishing company -- a series of guides on business and technology topics called the "In 30 Minutes" series. There are five or six titles already, including "Dropbox In 30 Minutes" and a Google Docs for Dummies-type book.

If you're interested in learning more about the band, check out our Facebook page or the interview we did with GigGuide. We also have two Feiwu albums for sale on Amazon.
Posted by I Lamont at 1/31/2013 09:13:00 PM

Email ThisBlogThis!Share to TwitterShare to FacebookShare to Pinterest
Labels: Asia, I Lamont, Music