" to build a family tree over the past three weeks. The trial version was included in Genealogy for Dummies

, but I decided to buy the full version after about a week -- it's a pretty good tool for the tedious task of data entry, and allows users to drag photos and other multimedia from iPhoto, export to text and GEDCOM (the standard data exchange format for genealogy projects) and make a bunch of different reports. 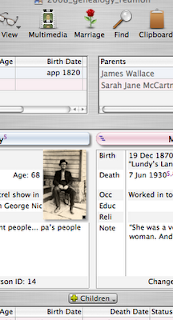 The tool is also good for focusing efforts. Anyone getting started with a genealogy project will be overwhelmed by the immense stores of information in both book and electronic form. Our local library has a special history reading room that has hundreds of record books and indexes, but there is no structured way for the novice to approach them. The Internet is the same -- there are dozens of larger genealogy sites, and thousands of online family trees, municipal databases, and cemetery lists. And there's Google -- it's so tempting to enter a name and a known fact about an ancestor, and see what turns up. But the results seldom provide clear, convenient answers. Rather, Google searches are usually starting points for further clicking, and the trails often lead nowhere. It can be a giant time suck, and very counterproductive.

has really helped me get this project off the ground. It allowed me to sit down with the many records I already have in my possession -- photos, audio recordings, handwritten letters and family trees -- and gradually collect all of the relevant biographical information into a single digital record that I can refer to later and use as the basis for focused explorations at the library or online. Listening to audio recordings of my great aunt, I was able to enter scores of family members from her generation and older with reasonably precise birth dates, occupations, addresses, and other information that may come in useful when I eventually hit the stacks. Reunion also has a very neat sourcing function, that I use to record the origins of practically every piece of information. It's been great for tracking down and verifying names and other pieces of data that may not have been clearly identified on the backs of photos or in some handwritten family trees in my possession, and you can reuse sources which saves typing and data-entry hassles.

Another interesting thing about the software is the export format. Before I cracked open Genealogy for Dummies

, I knew that there had to be a standard data exchange format that worked with various software packages and websites. I was expecting an XML-based format, and while several exist the gold standard for genealogy data exchange turns out to be a format developed for and maintained by the LDS church called GEDCOM. A single GEDCOM record might look like this:

If GEDCOM looks old school, that's because it is -- the format was originally created in the 1980s and the last major revision was apparently in 1996. XML seems to be the next logical step, but for whatever reason adoption has been slow. Reunion for the Mac doesn't even export in XML, even though at least one major schema exists, according to Genealogy for Dummies.