Back from Denver SABEW gathering 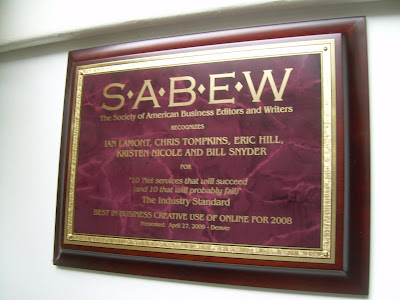 Last night I returned from Denver, which was the site of this year's SABEW conference. It was good, and not just because of the Best in Business awards ceremony (we won three SABEW BiB awards). Everyone was talking about the crisis in the media business, but it was interesting to note that the business media has fared a bit better than the mainstream media. Organizers repeatedly mentioned the fact that this year's American Society of Newspaper Editors convention was canceled, but the SABEW conference had a healthy attendance. One of the speakers, Ray Shaw (a former WSJ reporter and editor who is now chair of American City Business Journals) said his company's revenue sources -- subscriptions and ad bookings -- were actually looking up this year.

However, layoffs have affected the business media, especially at daily metro newspapers. There were more than a few people who had recently lost their jobs or taken buyouts, and one of the sessions I attended on entrepreneurship had a large audience. In the absence of jobs at established media outlets, people are clearly considering how to strike out on their own.

If you're interested in seeing what else was discussed at the conference, the best place to start is SABEW-related tweets.
Posted by I Lamont at 4/29/2009 08:45:00 AM

Email ThisBlogThis!Share to TwitterShare to FacebookShare to Pinterest
Labels: I Lamont, Media