The open-ended first-person shooter: A template for 21st century storytelling? 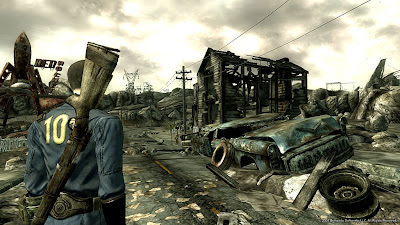 I've been playing videogames since the 1970s. I didn't try out a first-person shooter until 1996, when I happened upon a copy of Doom on a used ThinkPad I purchased in a Hong Kong computer bazaar. The 3D environments, the challenges, the puzzles, and the action were addictive, and I was hooked. Since then, I've played about a dozen or more FPS titles on various hardware platforms. My favorites: Return to Castle Wolfenstein (for the Mac) and Half Life 2 (for the original Xbox).

That is, they were my favorites until I tried Fallout 3

for the Xbox 360, created by Bethesda (see interview below, which includes some clips of gameplay -- note that it is extremely violent, and not suitable for children or the sqeamish). This FPS is similar to the titles mentioned above in that users play a character that has to use wits, exploration, and shooting skills to win the game. However, there are two additional elements that really set it apart:

While I'd heard of other games that had different outcomes depending on how you played the game or whether you were nice or mean, and had seen how cooperative/antagonistic behavior impacted massively multiplayer online games like World of Warcraft

, Fallout 3 was the first such FPS with this feature that I had a chance to play.

It was intriguing to see how non-player characters (computer-generated "people", animals, and robots) interacted with or reacted to my character, based on how he behaved. It totally changed the gameplay -- in some instances, getting "bad karma" resulted in being attacked and killed, or potentially losing the assistance of certain NPCs.

For example, an NPC named Paladin Cross came to my aid at one point and basically helped me survive several major combat situations. But, because she is associated with an honorable group that is out to save the world, the paladin is programmed to leave if the player steals from or hurts allied or innocent people. In other words, being bad in her proximity makes the game more difficult.

In other instances, being nice to strangers opened up new missions within the game (usually to deliver something, find an object in a difficult place, or locate someone.) I generally tried to play "nice" throughout the game, and gathered mostly good karma, but I wondered what would happen if I was bad throughout.

The second major change was the world of Fallout 3 – the "Capital Wasteland" around a post-apocalyptic Washington D.C., was an open-ended world. This is not typical of the FPS titles I've played in the past, where the player is channeled through specific locations in order to advance to the next level, and exploration is limited to that channel. In Fallout 3, buildings, subways, and cave systems usually have fixed channels that control the player's path, but outside it's possible to wander anywhere in the world (kind of like an MMOG), have random interactions with the beings encountered there, and enter buildings and do missions out of order. This adds a random, almost serendipity feel to the game, and is great for "explorer" personalities like me (see Richard Bartle's list of virtual world player taxonomy).

Along with the good/evil element described earlier, the open-ended nature of the game guarantees that no two games will be exactly alike. This is different than the models established by Doom, Half Life 2, and the popular WWII FPS titles I've played in the past, in which there is only one real path to take, and only one outcome to the game (or two, if you include the death of your character). In Fallout 3, the player is given a plot framework and has a lot of leeway to take the story in new directions.

This aspect of Fallout 3 -– along with the beautiful environment created by Bethesda's artists and various unexpected twists and characters -– made me wonder if these types of open-ended games are the template for 21st-century storytelling. I've alluded to the possibility of user-customized machinima in earlier writings (see Video, Computer-Generated Environments and the Future of the Web and "Meeting the Second Wave: How Technology, Demographics, and Usage Trends Will Drive the Next Generation of Media Evolution") but Fallout 3 involved active play within the story world, instead of passive consumption of a customized, linear plot.

The immersive experience of moving about this desolate, beautiful 3D world (unbelievably gorgeous and detailed in HD), and interacting with a wide range of characters, creatures, and subplots reminded me of some of the rich fantasy worlds created by storytellers such as Ridley Scott's team (Blade Runner

) and Gene Wolfe (The Book of the New Sun

). Of course, those stories centered around violent, loner characters on a futuristic mission. This dovetails with the FPS genre, but other types of stories – romance, comedy, drama – may find their 21st century voice in customizable machinima.