Boston Globe relaunches forums, but they're doing it all wrong

Like everyone else in this town, I've been following self-inflicted death throes of the paper-based Boston Globe for the past week. But for much longer I've been following its cautious exploration of the online world. 2008 was a watershed year for the company -- that's when they finally enabled article comments, got rolling on some cool and innovative products, and apparently began to get serious about online sales, judging by the vendors that I now see advertising on boston.com.

But this morning's announcement that it had reworked its forums was a step in the wrong direction. If it looks vaguely familiar, that's because you probably saw similar forums used by other publishers back in the 1990s. You know the type -- a giant list of top-level categories, many of them not touched for weeks or months, which lead to a list of threads. Most publishers stopped using such forums years ago, but the Globe has kept the same model and updated it with a few basic tools (how could they not have search until now?).

After browsing the new forums, I felt motivated enough to write to the Globe, but am reprinting it here, in case Director of Community Publishing Teresa M. Hanafin and her team miss the message:


Globe, you're doing some things right online (the photo blog and the local news aggregator come to mind) but your approach to forums is all wrong. The 1999/central menu/everything-under-the-sun approach is doomed to fail -- there are way too many topic areas to browse, and most of them will be inactive for long stretches or will have only a few participants, which will be a cue for new users to decamp for other climes.

The way you should be doing it is a niche approach -- a community or two with just a single theme (Boston Sports Nuts or MassPols -- geddit?) and let those grow, perhaps with the gentle nudging of a blogger. There is certainly enough fodder to go on (you could reference articles or article comments that are particularly strong) and if the community shows signs of branching out into other areas, that's when you create the new topic area within the community or split it off.

Or, if you are particularly motivated, get some developer that can figure out Facebook Connect and try to create a new product that straddles FB and the Globe. People are spending more and more time on FB anyway, why not leverage that community in new and exciting ways? It will take care of the logon issue, and will also avoid the anonymous trolling problem you've had with article comments. 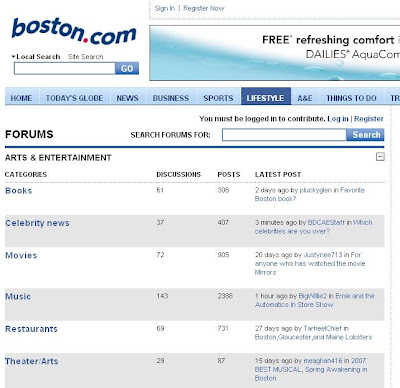 Email ThisBlogThis!Share to TwitterShare to FacebookShare to Pinterest
Labels: Media