I've done some volunteer mentoring for my alma matter Boston University at the graduate level, but today I got to see the school through prospective undergraduate eyes after taking my daughter there for an info session. It's interesting to see how much has changed since I attended BU some 30 years ago, even while some things have remained the same.

Being an urban campus spread out along Comm Ave, BU never had a "center" of campus the way many other schools do. That said, when I started my undergraduate degree back in the 1980s the center of gravity was generally the area from Marsh Chapel/Warren Towers/GSU down to Kenmore Square, where the BU Bookstore and Myles Standish Hall were located. Kenmore was a lively and somewhat gritty place, not just because of its proximity to Fenway Park, but also because of the clubs, restaurants, and shops. There was even a movie theater a short walk from Kenmore, the Nickelodeon behind Warren Towers and the College of Communication.

West Campus in the 80s was a distant planet, a mile up Comm Ave from Marsh Chapel. This is where athletes and fine arts students roamed. BU had three large dorms there, as well as SFA and a few real estate holdings like the old brick armory. I only went up there when I was in the BU marching band (BU still had a football team) or when I attended concerts in clubs such as the Paradise or Bunratties.

How things have changed. In 2020, Kenmore is a luxury dead zone. The Rat, Narcissus, Nemos, and the BU Bookstore are all long gone, along with the many small record shops and cheap restaurants that students used to frequent. They've been replaced by high-priced hotel rooms and condos. Just about the only holdouts are the Buckminster and of course Kenmore Station, as well as the dorm and a few brownstones BU bought decades ago.

West Campus is now totally transformed, thanks to a slew of new dorms and facilities including Agganis Arena and a very modern fitness center. The BU Bookstore is there, too (moved up to 990 Comm Ave.) And the cultural attractions including food and activities seem to have multiplied. The Paradise is still there (and better than before with a more concert-friendly layout), but now there are new clubs (Brighton Music Hall) and far more Asian restaurants and small shops down Brighton Ave and up Harvard Ave.

Indeed, the new BU axis seems to have flipped to the west. Students still live in Warren and take classes across the street in the old academic buildings, COM, and the expanded School of Engineering, but they are more likely to be drawn up to West Campus to use FitRec, go to the BU Bookstore, or sample the student haunts in Allston than to go down to Kenmore. Why go to Kenmore when there's nothing to do there? 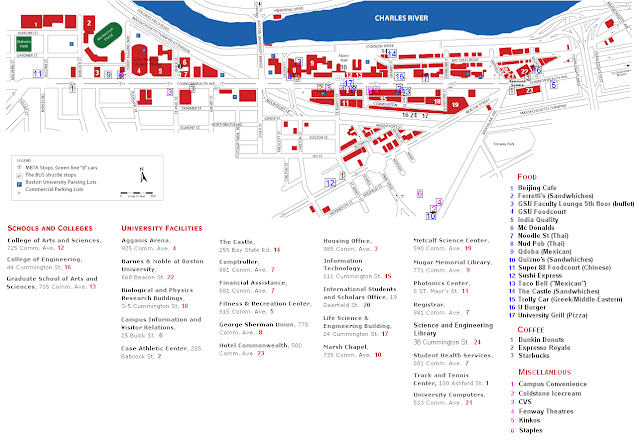 One of the few buildings that hasn't changed much on the outside is COM, at 640 Comm Ave. The exterior still looks as it did 35 years ago (a squat 50s-era classroom/lab building), although the interior has been refreshed and WBUR is no longer on the third floor (it moved to West Campus, naturally).

The academics at Boston University have evolved and gotten stronger. I have seen some of this through the pages of Bostonia (the alumni magazine), which highlights research and other activities. BU's physical expansion has been going on since the 1980s, thanks to some smart real estate investments in the second half of the 20th century, but a lot of organizational change and a focus on research and academic excellence across the university has taken place under President Robert Brown, who was recruited from MIT 15 years ago.

This excellence is reflected in the many research initiatives as well as scholars and students attracted to the school. According to the handbook I was given today, the middle 50% for SAT scores ranges between 1420 and 1530, and the admit rate is below 20% -- roughly what Harvard College experienced in the 80s. It's pretty clear that BU is now in the upper echelons of second-tier private colleges. In the 80s, BU was considered a good school, but wasn't at that level. 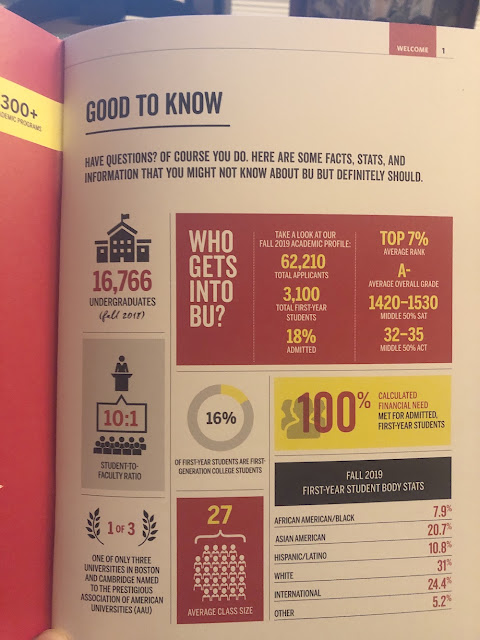 During my student years in the late 80s and early 90s, it was clear that President John Silber sought to raise BU's profile as well, and succeeded in the sense of moving BU from a regional college to an international university. But Silber also held it back. He was a condescending, polarizing figure to students and faculty. Silber delighted in steamrolling campus voices that spoke out or took stances he didn't like, and would go to great lengths to shut them down, such as his move to establish WBUR as an independent entity (as a COM student, I was not able to even intern there). It wasn't until both he and his protege Jon Westling had left that the university could enter a new phase of development, and I think Brown's stewardship has been wonderful.

Brown and his people brought over some concepts from MIT that are a breath of fresh air, including UROP (Undergraduate Research Opportunities Program) which matches undergraduates with labs, studies, and other academic research initiatives.  I really wish we had something like this when I was there (at the time, serious research was typically the domain of grad students) but I was able to do other activities that matched my academic interests.

It's interesting to me that some of the academic activities I took part in as a student 30 years ago are still around, including the London Internship Program -- a combined internship/study abroad program that literally changed my life (long story for another post). The London campus has also become a bigger part of the undergraduate experience thanks to integration with the College of General Studies -- from what I understand, CGS students starting in the Spring spend their first semester in London with faculty, which seems like a fantastic opportunity for learning and bonding.

Anyway, those are some thoughts I have after visiting BU with my daughter. Are you a current or former BU student? Please feel free to share comments below.