I've posted in the past about Ardoch, the tiny Scottish Highlands hamlet in Glengairn, Aberdeenshire from whence several of my forebears came. Ardoch was abandoned long ago, but those blog posts generated a fair amount of interest from all over the world -- I'm not the only Ardoch descendent looking into his or her genealogy!

One of the emails I received was from Peter Brown, an Australian who descended from one of the other 19th century Ardoch residents, Charles Calder, who ran a shop in the village. Peter noted that in the the mid 1950s a Reverend Mark Dilworth wrote about the famous Father Lachlan McIntosh, who lived in the village and tended to the hundreds of Catholic families residing in Glen Gairn and surrounding valleys north of the River Dee. The report was titled, "Catholic Glengairn in the early nineteenth century."

The Dilworth report included recollections collected by Mgr Meany (a missionary serving the Glen Gairn area) one stormy night (the interviewees may have been stranded in an inn during a storm) from several elderly ladies who had grown up in Ardoch 60 or 70 years before.

I had seen an abridged version of these accounts in Nita Caffrey's extensive 2006 genealogy, and wondered about the rest of the primary source. Peter speculated that it was located in Aberdeen University library, but he also had a PDF of the Ardoch pages, and from it had drawn up a map of the crofts at Ardoch circa 1830.

Peter and I decided to embark on a fun genealogy project: Publishing the 1830 map online (see below) and also building a census of the Ardoch occupants from the late 1700s to the mid 1800s based on data from Dilworth, official censuses, and other documents.

Ardoch was marked on a 1755 British topographical military survey; the arrows below point to "Ardoch" and "Ardoch Pinzey":

In 1785, according to the Dilworth paper, Father McIntosh built a chapel at Ardoch. The shape of the village was roughly like a horseshoe, as this 1868 UK Ordnance Survey map shows: 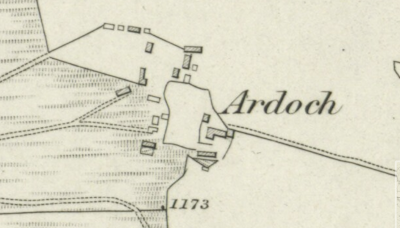 The earliest recorded inhabitants I could find were a Stuart and Lamont families (doubtful that the latter were related to me) who had infants born in Ardoch 1799 according to Catholic baptismal records. I took recreated census snapshots at 1814 and 1830. The official UK census for Scotland did not start until 1841, which is also included on the spreadsheet and people mapped to specific houses in the village.

First, here is an description of Father McIntosh and the village of Ardoch from Caffrey's 2006 genealogy:


The priest lived in a predominately Catholic hamlet, called Ardoch ( high field). This higher area was known to be of the ‘old faith’. It had about fourteen houses and it was a muddy place (and still is). “The houses were stragglin’ back and ‘fore as if they had fan’an oot o’ the air”, said one resident. There was steep land behind the houses. They had a school there but was “just a reeky hole”. A little burn (creek) came down between the houses and every house had a tiny dam, an outlet spout and a bucket underneath. It was a place for gossip and friendship.

My parents visited the abandoned village in 2015, and took pictures of the grassy ruins.


“It’s a rough landscape with steep slopes and lots of stones and boulders. Few crops are seen except hay and potatoes, and few of the latter. The old tenant farmers were kicked off the land to make way for grouse and deer hunting, or for religious reasons. ... That said, the scenery is majestic and serene. Rugged peaks, burns, falls, deer everywhere and red grouse. The people are friendly and quite jolly, too. Pubs are crowded in town with locals and visitors. Two Highland weddings took place in town yesterday and they were dancing until 1 am next to our hotel.”

The map based on the Dilworth report was rough, but working with Peter and other sources I was able to create a digital version. The map notes a path leading northwest out of Ardoch to  Clashinruich, the site of a simple chapel (Latlong coordinates: 57.097421, -3.134536). Citing James Dyas Davidson in this Flickr photo:


[The Clashinruich] chapel was built in 1785 by Father Lachlan McIntosh, a priest who tended the Catholic community in Glen Gairn for sixty four years. He died in 1846, aged ninety three. He was known as the apostle of Glen Gairn. ‘The altar was just a rough table. The roof was open and showed rude beams. Father Mann had the chapel lathed. Some of the folk had kneeling boards, but maist of them prayed kneeling on the clay floor.’ According to Ian Murray’s book, In the Shadow of Lochnagar, the field below the chapel was a burial ground, mainly for children who died in infancy. There is nothing today to indicate that it was a site of such tragedy. 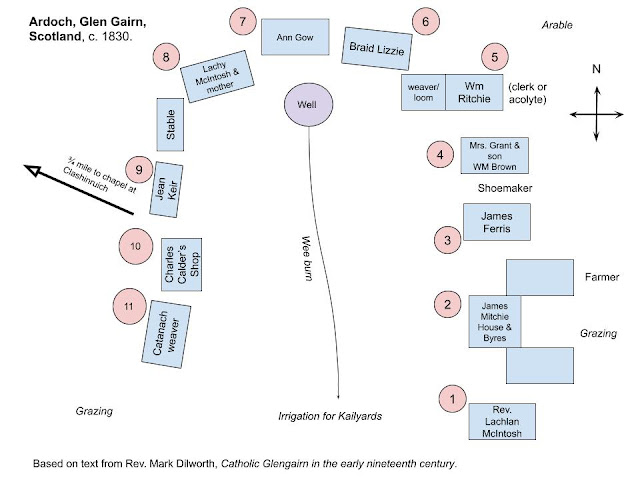 As for the Ardoch census, I started working on it in Google Sheets. It's ugly, but helps to track the evolution of the town in the early 1800s.

Peter also proposed tracking residents of Ardoch to their respective countries of emigration, which as far as I know include Australia, New Zealand, South Africa, the United States, and possibly Canada. That's a project for another day, but if you have insights to share, please leave them in the comments or contact me.
Posted by I Lamont at 11/10/2019 08:18:00 PM