Lamont genealogy and the lost hamlets of Glengairn, Aberdeenshire

For years I have been researching the origins of my family. One of the most perplexing mysteries concerned the origins of my forebear James Lamont who emigrated from Scotland to the United States in the mid-1800s. I knew his name, his year of birth, the names of his parents and children, but little about where he came from. In the past few months, with the aid of a professional genealogist and a local historian in Scotland, I have narrowed the search to a remote area of Aberdeenshire, a historical district in Scotland. [Update: I have published additional posts relating to Aberdeeshire here: Ardoch Scotland revisited (2016) and Ardoch, Scotland in 1830: Recreated map and census (2019)]

Any American who attempts genealogical research of Scottish forebears is likely to run into a records gap when going back before 1850. The quantity and quality of census records, church records, newspapers, and other written documentation is poor -- for instance, the UK did not begin a census until 1841 and Scottish civil records (marriages, births, etc.) weren't really formalized until 1855. In the U.S., record-keeping tended to be somewhat better but there are still many gaps.

For James Lamont, we have a copy of his newspaper obituary in New York state, which was a trove of information, as well as his death record (kept on file in a small town in western New York) which listed his parents' names -- James Lamont and "Ann Mechie." Through the obituary and New York state and federal census records I was able to determine the year of birth (1814, most likely between January and May). While the obituary confirmed he was from Scotland, the only information about where in Scotland he came from was a reference in an 1870s "who's who" of Niagara County, New York, which listed "Knearden" as the family's place of origin in Scotland.

Here are some of the problems I encountered:

After spending years trying to crack the "brick wall" I contacted the New England Historical Genealogical Society and commissioned their experienced genealogists to see if they could go further. Here's what they found:


We began our research by looking for the birth of James Lamont in Scotland. We were not able to find his record and decided to broaden our scope. Next, we looked for Scottish birth records for children of James and Ann (Mechie) Lamont. We were able to find one birth record for a couple of this name. Donald Lamond, son of James and Anne (Michie) Lamond of Ardoch, was born and baptized on 13 March 1814. Donald was baptized in St. Nathalan Roman Catholic Church in Ballater. The village of Ballater is in the parish of Glenmuick, Tullich and Glengairn in the Kincardine O'Neil district in Aberdeenshire [Aberdeen County], Scotland. Ardoch is located about 2 miles north- west of Ballater. It is possible “Knearden” is referring to the Kincardine O'Neil district. ... Next we turned to passenger arrival records. If James Lamont arrived in New York City about 1850-1851 it was before Castle Garden or Ellis Island were in operation. However, no arrival records was found for James or Helen/Ellen (____) Lamont in currently available digitized sources. It is possible the couple travelled via Canada to Niagara County, New York. Unfortunately, records for this time period in Canada are sparse and nothing was found for the family.

Interesting. The "Knearden" misspelling was plausible -- I could see the editor of a rural "who's who" in New York making the mistake, especially if the source had a heavy accent or wasn't sure of the spelling himself. This could also take care of the issue of James Lamont being a farmer - he wasn't from Aberdeen city, but rather a very rural area of the highlands in Aberdeenshire, a county-like district reaching deep into the Scottish Highlands. Even more interesting was the James Lamond/Ann Michie couple. I had been searching on "Lamont" and ignoring variations, but "Lamond" is actually a common variation. "Michie" is a rare Scottish surname.

Nevertheless, there were still problems with the NEHGS findings. This couple only had one child, born the same year, but with a different name (Donald, not James). What was going on here?

I searched the records of Scotlands People for other children born to this couple. Nothing. This was odd, as most families at the time tended to have many children.

What about this place called Ardoch? It was listed on historical maps: 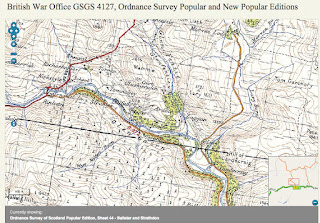 Now it is only ruins, as shown in this photo collection. It's one of about a dozen abandoned hamlets a few miles north of Ballater in the valley of the river Gairn, known as Glen Gairn or Glengairn. It's not far from Balmoral, the British royal retreat. Until the mid-1800s most of the people of Glengairn were Catholic, in a mostly Protestant Scotland. They were protected by the fact that Glengairn was so remote and several powerful landowners in the area were themselves Catholic. But changes in the economy of the area -- including the creation of "deer forests" for nobles, the expansion of sheep farming, and the sales of large tracts of land -- encouraged many to move elsewhere or emigrate. A large number of Glengairn inhabitants emigrated to Australia, as well as some to Canada. And, perhaps, some to the United States.


The earliest appearance of a Lamont in the Braemar district was in 1483 when an Archibald was in trouble for cattle lifting. Tradition insists that the first of the clan in that airt was a daughter of a Laird of Lamont who was married about this time to a McGregor of Inverey. Following the old Celtic custom of leine-chneis she took her retainers with her, and so was founded a new branch of the clan still to the fore to this day.

Braemar is located to the west of Ballater, perhaps 10 miles distant -- certainly not out of the realm of possibility for Lamonts from Braemar to settle in the hills north of Ballater.

"Lamond" is apparently a medieval spelling, and the same 1938 account explains more history about the Braemar branch and their connection with the main body of the Lamonts in western Scotland:


(In 1682) the Braemar branch of the clan, realising that Archibald [Lamont] was now a power in the land, applied to him for recognition and protection. Their petition, which is still to the fore in the National Library, is striking evidence of the strength of the bond between chief and clansmen though living beyond the ken of one another. "Ther will be in this countrey of the bray of Marr," it commences, " about fourtie men of our name of MackLamond trewlie come from your honor's country long since and be reason of some accidents hes turned our right name as is knowne to be verie usuall in highland countreys. Wee all of our race knowes our owine genelogie our selfes. Wee live heir honestlie altho' not rich nor in great power be reison we want on above the rest as a cheiffe to owine us & keip us unwronged." The bearer of this appeal, which must have been personally presented at Ardlamont was to explain in detail a particular grievance: “…all these who descended of him were commonly called Gordones, altho' the right name is Lamond. Otheres of us be reason of our predecessor's blackness are called Mcgildui.”

I called a local historian, who confirmed that the Lamonts were "thick around Braemar," not so much around Ardoch or Ballater. There were not any census records of Ardoch or the other forgotten hamlets in the Glen Gairn area, north of Ballater.

One thing I have learned in years of doing research is always look at the original source -- sometimes clues lie in the records themselves which may not be apparent from database searches or second-hand information. So I went to Scotlands People and downloaded an image of the baptism of Donald Lamond, born to James and Ann Michie and recorded by St. Nathalan Catholic church in Ballater:
One thing that was immediately apparent was other Lamonts lived in the area closer to Ballater -- a Donald Lamond of Lary was listed as the sponsor (Godfather) while a birth from February 1814 listed another Lamont birth, Margaret, born to Alex Lamont Margaret Farquarson.

I was curious. What was on the other side of the notebook of the baptism list from St. Nathalan? I downloaded it from Scotland's People:
Not only were there even more Lamont/Lamond baptisms listed, one of them was a James Lamond, born the same month as the infant Donald. James' parents were Donald Lamond and Helen Farquarson. They resided in another hamlet, Shenval, located less than a mile from Ardoch.

Wow. Was the elder Donald Lamond of Shenval who sponsored infant Donald Lamond the same person as the father of James Lamond? Probably not, as on April 6 1814 another birth was recorded for Donald Lamond of Lary and his wife Elspet Lymon. But considering the closeness of the three hamlets (Ardoch, Shenval and Lary) and the common forenames (two James and three Donalds) suggests some family connection -- most likely brothers and cousins -- is possible, or even likely.

Here are some other hypotheses: Was it possible that infant Donald Lamond had a middle name James, or the infant James Lamond of Shenval was for some reason brought up by James Lamond and Ann Michie of Ardoch? In the 1841 Censuses for the Parish of Crathie and Braemar and the Parish of Glenmuick, Tullich & Glengairn there are no traces of Donald Lamont or Lamond, but there are many households in which infants or young children are living with adults with different surnames -- perhaps relatives, or paid guardians, or orphans. Here is one household in the Glenmuick, Tullich & Glengairn census from 1841:


Enumeration District 5: From the junction of the Gairn with the Dee up the North bank of the Dee until opposite Terquach; thence to the top of the hill above Terquach; then east along the top of the hills above Terquach Micras & Gaelic in a straight line until it reach the Gairn at a point west of Culsh.
Place: Kylacreech
Euphemia Christie 70
Jane [Christie] 50
Jane McHardy 25
Lewis Symon 1

These are hypotheses, not definite answers. Still, the origins of this family loosely match the data we have from James Lamont of Niagara County, NY. The birth year of 1814 matches, and there were no other James Lamonts or Lamonds born that year. James Lamond and Ann Michie were the only couple in Scotland having a similar name to the parents on the Niagara County death certificate -- I did extensive searches of the Scotland's People database to see if any other couples with similar names were recorded, and came up empty. And then there's the family lore, which has the family coming from Aberdeen and the Niagara County book of local notables which lists "Knearden" but is very likely to a misspelling of "Kincardine."

I feel there is a family connection, but more research is needed. The smoking gun could come in several ways:
On this last point, if you have something to share relating to James Lamont (James Lamond) or his family, or know more about the Lamonts of Braemar and Glenmuick, Tullich and Glengairn, please write me at ilamont.com@gmail.com.

March 31 1814
To Donald Lamond and Helena Farqu [Ghenvae …] [probably SHENVAL] a son born 28 Cur and baptized James. Sponsor John and Margret Grant, Torran [a hamlet next to Shenval and less than a mile from ARDOCH]

June 17 1814
To Jane Fleming Aberarder and one calling himself McDonald whom she never saw before or after. A daughter born May 26 and baptized Agnes ipse and Agnes Fleming Tullochnacraig sponsors.

Aug X 1814
To Will Callanach and Jannet Coutts [Gleach] a daughter birn this day and baptized Anne. Sponsor Mary Furguson and Charles Coullyty.