Last year I wrote a post about Ardoch, an abandoned Catholic village in the Scottish Highlands from whence my forebears came (see Lamont genealogy and the lost hamlets of Glengairn, Aberdeenshire). Since that post, I have conducted additional research about Ardoch and Glengairn which I will share below. Genealogists interested in researching Lamont, Michie, McIntosh, or other Glengairn families are welcome to contact me at lamont -at- sloan dot mit dot edu. (Update: In 2019 I published Ardoch, Scotland in 1830: Recreated map and census)

“Glengairn” means “Valley of the [river] Gairn.” It is in this valley, located north of Ballater and the river Dee, that a vibrant Catholic community existed in the early 1800s. There were small hamlets located on the hills, sometimes little more than farmsteads, with names like Richarkarie, Tomnavey, Clashanruich, Dalfad, Laggan, and Lary. Inhabitants were Gaelic speakers, with only a limited number having any English education. They engaged in subsistence farming and weaving, but they did not own the land—they were tenants of wealthy landowners who limited activities such as hunting and salmon fishing. A 2006 genealogy by Nita Caffrey described living conditions in this part of the Highlands during the 1700s:


“The lower class lived in hovels built of rough boulders held together by dried mud, and thatched with heather or broom (bunch of twigs or straw). Usually there was an enclosure on one end of the house for the animals. It usually had an earthen floor, often so uneven that in damp weather, pools of water had to be stepped across to reach the peat fire. The fireplaces had wide open chimneys, with a seat at each corner and an iron with chain and crook to hang the kettle or three legged pot upon. Wood and peat (partially carbonized vegetable matter, usually mosses, found in bogs) were the fuel burned, as coal was not yet heard of. The cruisie lamp (fish oil) was used for light. Notwithstanding such conditions the race of people was strong and healthy; there were few hardier, stronger men than the Highlanders. The crofters possessed a cow, and oatmeal and milk were their food. Those who were better off had a few sheep and the wool was spun by the women and woven into blankets and tartan cloth.”

The lairds of Glengairn were Catholic, which afforded their tenants a certain degree of protection from official oversight and anti-Catholic policies that dominated most other parts of Scotland. However, priests were persecuted throughout the 1700s into the early 1800s. A correspondent who grew up in the area and is researching the Ewen line told me:


"The whole of the Braemar area was a catholic stronghold (as also was Glen Gairn) right up to the 1745 uprising and I would be surprised if the Braemar Lamonts were of any other persuasion.   I know that there was persecution of Catholics taking place in Braemar  is 1785 as the priest was then living in a remote cottage at Inverey, and again in 1822 the Catholic School moved from Braemar to Inverey for the same reason."


Many residents of Glengairn were Catholic, but retained superstitious beliefs not unlike those found in Ireland. The following excerpt comes from research conducted by John Stephen and published as part of a PhD dissertation at the University of Glasgow in 2004: 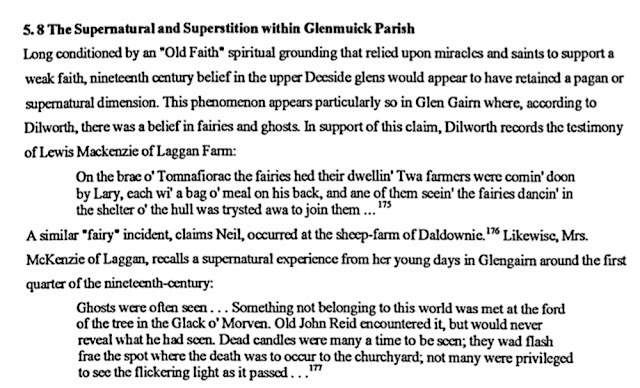 Paradoxically, the residents were also in close connection with their Catholic faith. Glengairn had its own priest, Father Lachlan McIntosh, a remarkable character known as the Apostle of Glengairn who tended to the inhabitants of the valley from 1782 to 1846. He lived in the village of Ardoch (Gaelic for “High Land”), which was a hamlet of more than one dozen buildings, including at least one shop. There is an account of life during this period in an 1892 publication, Notes on Glengairn, Catholic Glengairn- Early Nineteenth Century, cited in Caffrey’s 2006 genealogy. One of the former inhabitants, Mrs. McKenzie (nee Michie), had this recollection:

“When I was 5 or 6 years of age I went to Ardoch to be Fr. Lachlan [McIntosh’s] servant. He came and took me by the hand and asked me to live at his house and herd his 2 cows. At that time, about 1830, Ardoch was quite a Catholic hamlet. It contained fourteen fire houses, [with chimney and fireplace] There was a shop kept by Chas. Calder. Calder drove merchandise between Blairgowrie and Ardoch, and over his shop door he displayed a sign board from which I took almost my first reading lesson. He was ’licensed to retail tobacco and snuff’ There were in the village two weavers, Wm. Ritchie and James Cattenach, who did a thriving business.”


“His life was very homely. He rose early, and said Mass regularly every Friday. People from a distance were always sure of Mass on Friday. Every day the old man kept moving about amongst his people. His only outdoor recreation was angling. Children knew his ways and would steal from him to the Gairn, when they were always rewarded by a gift of the take of trout. They used to help the old gentleman to disentangle his hooks which frequently got caught in the birch and alder trees that overhang the water. Many a time too he carried ’black sugar’ ( licorice) with him and we bairns knew this habit and expected some of the sweet stuff, which we guessed was meant for us. He generally wore a Spanish cloak of dark material. It was fastened at the neck by a silver clasp. When walking he always used a well-mounted stick with a long tassel hanging from the head. He took a keen interest in his farm and often carried, under the folds of his wide cloak, pieces of oat-cake and tit-bits for the horses that did the work of his croft. Fr. Lachlan had a grey mare which was mettlesome and very strong. His niece did the work of the farm in great part; she harrowed and went to the hill (worked at the peats) His dinner was just potatoes taken in their skins over the fireside and for supper brochan ( a kind of oatmeal gruel) and potatoes, which the neighbours often shared round his hearth.”

The priest’s old house at Ardoch is just ruins now, but the impact this man had on the region is still remembered today. Here is a picture taken by relatives who visited in 2015:


“It’s a rough landscape with steep slopes and lots of stones and boulders. Few crops are seen except hay and potatoes, and few of the latter. The old tenant farmers were kicked off the land to make way for grouse and deer hunting, or for religious reasons. ... That said, the scenery is majestic and serene. Rugged peaks, burns, falls, deer everywhere and red grouse. The people are friendly and quite jolly, too. Pubs are crowded in town with locals and visitors. Two Highland weddings took place in town yesterday and they were dancing until 1 am next to our hotel.”

Here is a photo of Ardoch, where a few ruined houses can still be seen:


So why did people leave Glengairn? Economic and demographic trends taking place in the Glengairn region from 1830 to 1870 (described in Stephen’s 2004 PhD thesis) are relevant. These factors included:
Many Highland crofters were cleared from their homes. Some found employment on the sheep farms or aristocrats’ estates, while others moved to other parts of Scotland and England. But many emigrated overseas, encouraged by relatives and friends who had already moved, as well as by advertisements that celebrated the opportunities available to hard-working Highland folk. Free passage was offered to people emigrating to the British colonies in Canada, Australia, and New Zealand. Passage to the United States was inexpensive. For the families who boarded the ships, the lure of cheap land and freedom of worship must have seemed very appealing.

The last residents of Ardoch, including the last native Gaelic speaker in the area, died in the 1980s. Their story is told by Andy Wightman, who noted:

Unlike most of the rest of the Highlands, Aberdeenshire was never included within the scope of the Crofters’ Holdings (Scotland) Act 1886 because the powerful lowland landowners refused to countenance such a move. As a consequence, vast swathes of the Highlands in the non-crofting counties have lost their people, their language and their culture as the tenants of the land were never more than one year away from eviction. This includes the “other” Ardoch which features on the cover of my book, The Poor Had No Lawyers, more images of which can be seen at James Dyas Davidson’s portfolio here. Had things been different, highland Aberdeenshire might today be home to a thriving gaelic culture. Places like Ardoch would be occupied by crofting tenants with secure, heritable tenancies. As a result of this failure to provide legal protection to tenants, Deeside Gaelic is now extinct and Ardoch was put on the international property market by Savills on behalf of Invercauld Estate last year [2011]. It was sold earlier this year for £212,500.

Email ThisBlogThis!Share to TwitterShare to FacebookShare to Pinterest
Labels: Global, History, I Lamont