MIT Media Lab: Robots, and the best Lego set ever

One thing I've wanted to do since arriving at MIT at the beginning of the summer is to see the MIT Media Lab. I mean, I'm a media guy interested in geeky technologies, so it should be one of the first stops, right? 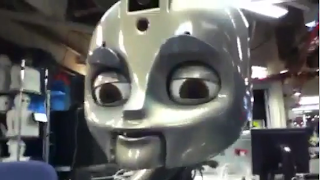 Well, I never got around to going into the Media Lab building, until today. I heard from two non-Sloan friends of mine -- a current PhD candidate studying new ways to do gaming AIs, and a staff member who helped make the world's first robot opera -- that there was a Media Lab open house, in which most of the current projects (and a few past ones, too) would be on display with researchers on hand to explain them.

Firehose time. I spent a few hours visiting the offices and labs, drinking in projects that ranged from anthropomorphic robots (such as Lexi, inset) to a kids-oriented programming language to "tangible media.

Unfortunately, there was no way to see it all. But I was able to shoot a few highlights and conduct some interviews using my iPod touch. There are three videos:

MIT Media Lab Open House Video #3: An army of robots? (I was unable to find the identity of the PhD student on the Media Lab/Personal Robotics Group website, but I am wondering if that's because of the military sponsor?)