"To get the real taste of Vietnam, you have to be in Vietnam to try it"

So I'm in Vietnam right now for a school project. We're based in one of the outer districts of Saigon where few foreigners tread, but there's nevertheless a lot of things to experience here -- particularly when it comes to food. 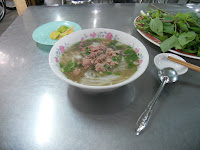 From the moment I arrived, I've made it a point to try all sorts of restaurants, dishes, and snacks, some of which I have documented on Twitter. Today, I managed to have Vietnamese variations on soup for breakfast, lunch and dinner. Not one of the meals was advertised as "pho" -- the classic rice noodle soup made from dry noodles, that are often served at Vietnamese restaurants in the States (the inset picture is of some beef pho that I had last week). But two of today's soups were quite close to pho -- the pork knuckle hủ tiểu (flat rice noodle that retain some moisture before being made into soup) I had at a street stall for breakfast (see video below) as well as the Bun Bo Hue (Hue-style beef noodle soup, made with rice noodles that look like spaghetti) I had for dinner. Like pho, the hủ tiểu and Hue soups used clear broths and had similar vegetable condiments.

The odd soup today of the bunch was Bun Ca Re (curry noodles) at a vegetarian restaurant for lunch. It was nothing like the clear-brothed soups. The curry broth was thick and had a sweet curry taste, and had huge lumps of potato in it as well as fine rice noodles that had absorbed the broth. It needed extra spice. This was not a problem, as the vegetarian restaurant, like practically all Vietnamese soup restaurants I've been to, puts out a little dish of green chiles to add to the broth, according to the diner's tastes.

All of the soups were cheap. The cost breakdown was as follows, converted from Vietnamese dong:
The following video gives an idea of what it's like to eat at a street stall. Note that array of condiments (limes, chiles, sauces, and leafy vegetables). The ingredients of the soup, besides broth and noodles, were pork knuckle, garlic, deep-fried shallots and garlic, black pepper, some chopped scallions, and many other fresh spices I couldn't identify, but greatly enjoyed eating!