What was Feiwu (廢物樂隊) like live? The last show I played with them was more than 13 years ago, but I remember them as being a lot of fun, particularly after we developed a fan base. Our December 1998 CD release party, from which the following audio was taken, had a few hundred people attending. You can hear the crowd getting into it:

Note that the pictures are from many different shows and practice sessions from 1997 to 2001. The art is public domain from Ookaboo.com.

A flyer from a concert we did with Sugarplum Fairy (甜梅號) at a local college in 1999: 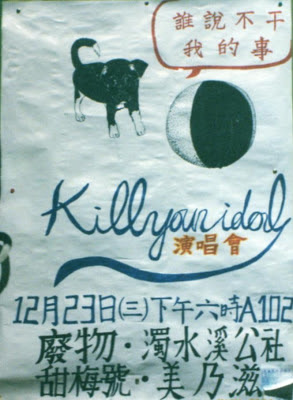 If you're interested in learning more about the band, check out our Facebook page or the interview we did with GigGuide. We also have two Feiwu albums for sale on Amazon.