Irish clues at a cemetery in northern New York 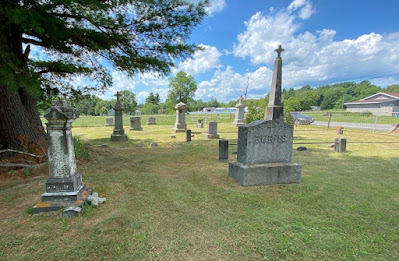 I am in northern New York this week. I took the scenic route through Vermont, because I wanted to stop at an ancestral graveyard on the far side of Lake Champlain to pay my respects ... and see if there are any other details I may have missed since my last visit 15 years ago.

The graveyard, located on Irish Settlement Road near the intersection with Military Turnpike (which has an interesting history) is small, but well kept. It contains mostly 19th-century graves of Irish settlers who came this area starting in the 1820s after an economic crisis struck the local weaving industry in County Meath, Ireland.

A 4x great grandfather is buried here, along with two of his sons, daughters-in-law, and many descendants. He died in 1837. The gravestone gives his place of origin - "A native of Philpotstown, Meath." In the past I have looked up this townland, and found two possibilities:

On this visit, I did a walk around the entire graveyard and noticed a stone belonging to another family which lists another nearby placename: Athboy. See it on the map below? It's on the left side, maybe 10 miles from the red arrow. 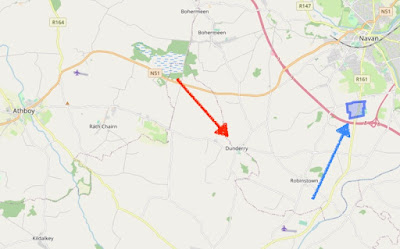 This piece of information verifies that immigrants buried in the Irish Settlement graveyard hailed from the same area. Does it mean that the Philpotstown marked by the red arrow is the correct place of origin, because it's closer to Athboy? Maybe.

Or maybe not. The economic crisis affected an entire region, so even though people settled in the same area in New York, it doesn't mean they were next-door neighbors back in Ireland. More research is needed. I hope to visit Ireland some day to do it in person, on the ground, seeing all of these places with my own two eyes.

There was another piece of information on my ancestor's gravestone, at the very bottom, right above the dirt:

So the son died a few months before the father. It makes you wonder if the two deaths were connected in some way. The stones do not say.

I paid my respects to my 4x Great Grandfather, touched the stones of other ancestors and relatives, and continued on my journey.

Email ThisBlogThis!Share to TwitterShare to FacebookShare to Pinterest
Labels: Genealogy