Thought I would share this story in honor of Father's Day. Last year, we had an outdoor brunch with my dad, who shared an interesting story about his own father, my grandfather.

My grandfather came of age during Prohibition in farming country in western New York. The people there were not only skilled at procuring alcohol from north of the border in nearby Canada, they were also skilled at making it. Lots of people brewed beer or cider for underground sale or home consumption ... and sometimes made harder stuff, too. 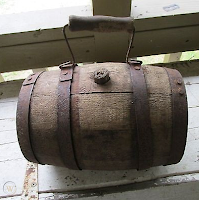 "Apple Jack" was one type of home brew popular among the Irish and Scots immigrants and their descendants living in the area. My grandfather's method, according to my father, involved taking a casket of hard cider, and putting it out in the barn on a really cold night. The water would freeze around the outer edge of the casket, but the liquid in the center - concentrated cider with a much higher alcohol content - could be tapped and extracted. This was how Apple Jack was made in those parts, and in other parts of the northeast during colonial times.


My father also remembered going fishing with his dad in the 1950s, and stopping to buy worms from local apple farmers. It turns out that a certain type of worm used to thrive in the discarded mash from the cider presses. Fish apparently loved them, so farmers would sell them as bait. Part of the ritual when buying worms, my dad recalled, involved the farmer offering some sweet cider to the kids, and a glass of hard cider to the adults, if they were so inclined. On a hot summer's day, that must have been refreshing.

The tradition of home-brewed alcohol still lives on. We used to live next to an Italian immigrant from Naples who brewed his own wine in the cellar and generously shared it with neighbors. It's very interesting to see much younger people who were born in the United States and have no family traditions getting into brewing beer using home kits. Others have gotten into craft beer, or spirits made by local companies, often family-owned companies.