(More pictures below, added 8/28) I spent a large chunk of my adult life -- about six years -- living in Taipei in the 1990s (I spent an additional year in London, as well as shorter stints in China, Malaysia, and Thailand, plus extensive travel in Europe, Asia, and Australia). I still travel to Taiwan once every two years or so, and it never ceases to amaze me how far the island has come in such a relatively short period of time. 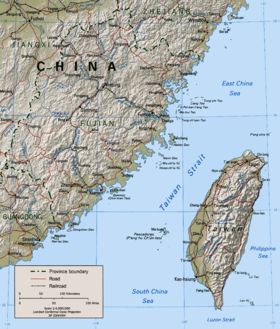 When I first arrived in January of 1993, Taipei was a bustling city with a somewhat decrepit feel to it. Sure, there were a few modern skyscrapers and branch offices of international corporations, but one didn't have to look far to see other sides of city. There were the traditional aspects -- night markets, temples, Chinese medicine shops, etc. -- and a few buildings from the Japanese colonial era, but there was something else as well: The chaotic legacy of Taiwan's post-war development, in which the island was controlled by a single political party and was transformed from a agriculturally oriented economy to one dependent upon manufacturing and international exports.

Urban planning in Taipei had been haphazard during this four-decade period. The city's architecture was spread between Chinese, Japanese and Western styles. Rule of law often seemed to be a selective concept, and civic pride was uneven -- or people were simply resigned to the existing order. There were few parks. In my neighborhood, residents threw trash bags onto a stinking pile located at the intersection of two alleys, where it was collected every night. The city of some three million people depended upon buses, cars, and what seemed like millions of scooters for getting around -- there was no subway system, and only a few older residents used bicycles. Taipei was still run by an appointed mayor, and the national government was controlled by an appointed president, both members of the ruling Nationalist KMT party.

Sixteen years later, many of these ragged edges have been smoothed over. One-party rule is a distant memory, and the country's media industry has exploded as press controls and other legacies of martial law have been eased. Development and infrastructure projects have shifted Taipei's economic and social center from the west, near the train station and presidential palace, to the east, where a giant building called Taipei 101 (briefly the tallest in the world) dominates the landscape and can be seen from practically every corner of the sprawling city. There is more green space, and new neighborhoods that simply didn't exist 16 years ago.

When I drive through the city now, I find myself constantly doing double takes. Consider the changes that have occurred in the Hsinyi district (信義區), where I lived in the mid 1990s. The district was on the southeastern edge of the Taipei basin, beyond the Taipei World Trade Center and the new municipal government complex, and could only be reached by scooter or bus. I remember acres of empty fields, hiking trails, and a cheap makeshift restaurant run by a family of waishengren (外省人), or "mainlanders" who had come over with Chiang Kai-shek's army and KMT government after the Chinese Communist Party took over the rest of China. It had a fringe feeling, which I really enjoyed.

That feeling is gone. Now, the Hsinyi district feels like the center of Taipei. Indeed, it is the center of town. The fields have given way to several malls and scores of high-rises, and the hole-in-the-wall restaurants, beer houses and betel nut stands have been replaced by modern restaurants and air-conditioned boutiques. Taipei 101 lords over it all, drawing thousands of office workers and visitors every day.

The Hsinyi area has also become a transportation hub -- besides hosting several stations for Taipei's MRT system, there are two hillside tunnels that mark the entrance to the second northern freeway, carved into the hillsides which used to be my favorite hiking area. The mountain tunnels and new freeways make getting to Ilan county a one-hour trip, compared to two hours via the coastal road in the old days. The MRT reaches far into the northern and eastern parts of the city and surrounding suburbs, and has connections to the island's new high-speed rail system.

All of these projects -- Taipei 101, the MRT, the high-speed rail network, several cross-town elevated freeways, the new mountain tunnels -- were erected in less than 15 years, and took unimaginable amounts of manpower and money to complete. Contrast that with Boston, which has only had one comparable infrastructure project in the past 15 years -- the Big Dig. By my reckoning, the equivalent of three or four Big Digs were concurrently built in Taipei during that time, and another two national projects (high-speed rail and highway/tunnel projects) were also completed with sections in the city.

Not everything has been rebuilt under tons of concrete and steel. I delight in the fact that many aspects of traditional Taiwanese society have not only persisted into the new millennium, they have gained strength. For instance, Taiwan has always had a strong food culture, but the media explosion I referred to earlier resulted in a number of new culturally oriented TV shows and magazines, and consequently a wider appreciation of food stands, specialty restaurants, traditional recipes, and local snacks. Religious life is still very active in large temples, local shrines, and home altars that people use to venerate Buddhist and Chinese deities and ancestors. People seem to have a newfound appreciation for the environment, as evidenced by the new riverside parks and the recent appearance of legions of young and middle-aged cyclists on local streets.

I documented my August trip using a Flip video camera and some still photographs. They illustrate some of the changes I have just mentioned, and show how some aspects of Taiwanese life have remained the same:

A common scene since the mid-1990s: subway construction under Taipei's major boulevards. It creates traffic jams, but the long-term payoff is worth it, once the hard hats finish their work and the new MRT lines open to the public: 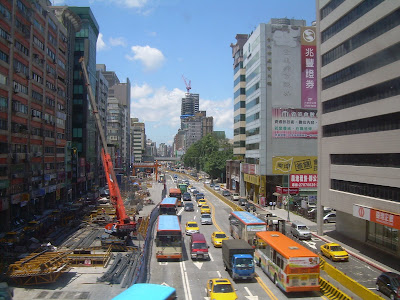 The view from a local MRT station on the Muzha line: 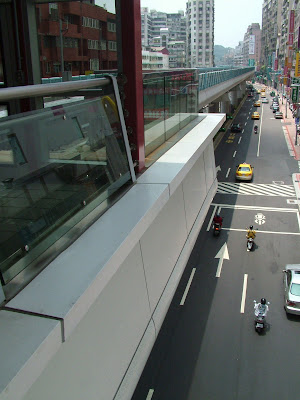 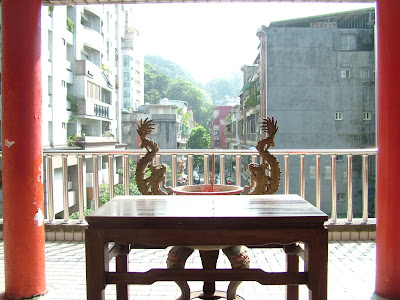 A scene from a night market in Luodong (羅東), Ilan County. 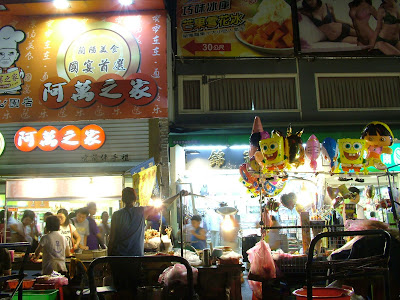 
A view of the Taipei basin from the Bishan Temple (碧山巖) in Neihu. If you click on the photo and zoom in, you can barely make out Taipei 101 through the haze: 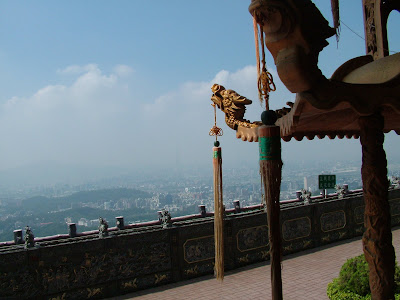 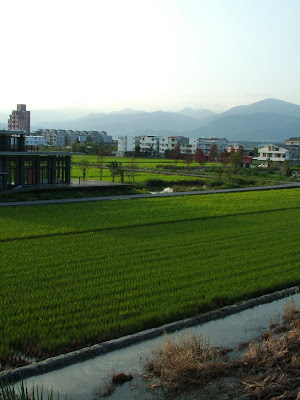 A scooter races by the gate of the 太陽堂 (Sun pavilion or shrine) in Neihu: 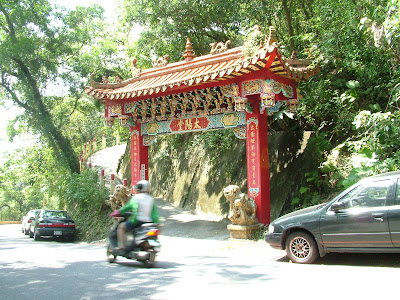 A dog dozes in the morning heat. Taiwan has a serious problem with street dogs, and I am disappointed to see that the problem has apparently not been seriously addressed in 16 years. A huge number of dogs still wander the streets and alleys of Taipei and sleep rough, and are often fed by sympathetic human neighbors. Most are not neutered and don't receive medical care, which perpetuates the population and leads to health and cleanliness issues. 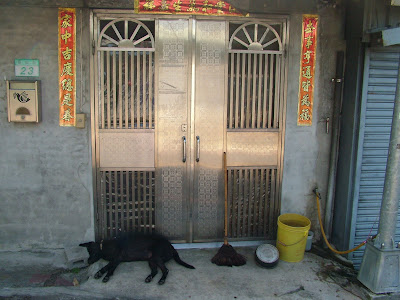 "Wheat Farm Manual Beer". No, it's not the Taiwanese version of St. Patrick's day beer or the result of a brewery mishap -- it's the green "zao" (藻) variety, which means "algae" (but maybe "microbe" sounds more appetizing). It's actually quite good, and proof positive of Taiwan's economic liberalization. For decades, Taiwan's government operated many monopolies, ranging from broadcasting to beer. When I arrived in 1993, it was possible to buy imported beers, but the only locally brewed stuff was Taiwan Beer. Taiwan Beer is still #1, but smaller breweries are making inroads. Unfortunately, if you want to try this tasty green brew, you'll have to travel to Ilan County to drink it -- it's not sold in Taipei, and probably won't be exported anytime soon. 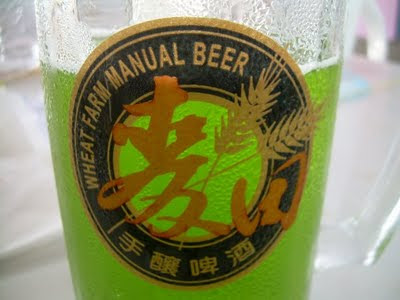 I am licensing these photos under Creative Commons 3.0, which basically means you are free to copy them, place them on your own website, use them for commercial purposes, and adapt them, as long as you attribute them to Ian Lamont and link back to this post on ilamont.com.
Posted by I Lamont at 8/27/2009 11:34:00 PM