(Update: Someone writing from the University of Phoenix's corporate parent attempted to post an anonymous comment. Scroll to the end for details) I knew that the multibillion dollar for-profit college industry had some ethical failings (see "ACICS accreditation and for-profit education: What's at stake"), but this takes the cake. According to Frontline's "Educating Sergeant Pantzke" (scroll down to see the video), the ways in which for-profit and mostly online colleges such as Westwood, University of Phoenix, Kaplan University, Gibbs College, DeVry University, Ashford University, and Art Institutes are exploiting military vets are absolutely shameful -- and motivated by a desire to scoop up billions in generous GI Bill benefits for veterans.


The vets have served their country, and want to use the educational benefit to get a solid  education and a good job following their service. However, the online degrees provide questionable educational value and Frontline found that hiring managers look down on them. In other words, it's a scam -- and taxpayers are paying for it. A few low points in the report:

There's more in the Frontline documentary, which you can watch below. It's only about 20 minutes long. I also urge you to watch Frontline's "College Inc." and read some of the other blog posts I've written about the University of Phoenix, online math classes, and distance education, which are listed below the video (scroll down to the bottom of the page).

University of Phoenix astroturfing my blog

Update: Someone attempted to leave a comment on the site stating the Frontline report is "misleading" and claiming that certain for-profit colleges "like University of Phoenix" are different, specifically when it comes to transferring credits.  However, there are some notable examples of schools that do not accept UoP transfer credits ("CIT does not accept courses from the University of Phoenix", "the University of Phoenix is not an accredited institution"). The author was anonymous, but when I checked out my web logs, what did I see? It turned out that the comment was left by someone from UoP's corporate parent, Apollo Group (see screenshot below, which shows the origin of the comment). 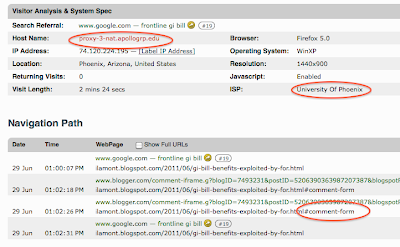 I don't mind if executives from for-profit schools leave comments on my blog, but they must clearly identify their association -- or the comment will be rejected and I will expose the incident. It's happened before, as this bizarre attempt at astroturfing or ridiculing UoP students (apparently by another UoP employee) shows.

For further reading about online education and for-profit colleges, I would suggest the following posts:
My company has also released a LinkedIn book that explains how to create a rock-solid profile and leverage the online LinkedIn network to improve your career.