One of the more interesting class projects I took part in during my last semester at MIT was our MIT Media Lab final project for MAS 571 ("Social TV: Creating New Connected Media Experiences"). The project was called WorldTV, and with my team (Jungmoo Park, MBA '11, and Giacomo Summa, MSMS '11), we created a pretty slick video demonstration of the proposed software UI. The video was shown at the MAS 571 demo day at the Media Lab (you can watch it below) and we wrote an accompanying concept paper that we are in the process of preparing for an IEEE CCNC workshop. In the following post, I'll describe not only what WorldTV is, but its genus and some of the reaction we've received so far. 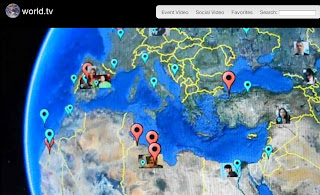 WorldTV is a television app and accompanying mobile app for browsing user-generated video from one's social circle, as well as event video produced by strangers that tie into one's news and cultural interests. Instead of using traditional browsing methods -- scrolling through channels or searching for videos -- the proposed service uses a 3D globe as a navigational tool. WorldTV is aimed at people with global networks, which might include people with friends, relatives, and colleagues from other countries; people who spend a fair amount of time travelling; or people who are interested in news or culture in other countries.

The concept had great appeal to the entire team, not only because of our backgrounds (Giacomo is from Italy, Jungmoo is from Korea, and I spent most of the 1990s living overseas) but also because all of us have observed the exponential growth of user-generated video and realize its power and appeal to ordinary people. In 2006, I wrote about the potential of geotagged, time-stamped online photos to give insights into local events. I expanded the idea to include tweets and user-generated video in a proposal for my Linked Data Ventures class called PPP (PixPeoplePlaces). When I began the Social TV class, I took the PPP concept even further with user-generated video, emphasizing the social aspect of plotting event video on a local map (this was the basis of my first assignment for Social TV -- you can see the poster here).

I envisioned all of these ideas as Web apps displayed on a computer monitor. For one of the early poster sessions for the Social TV class, Giacomo independently came up with a different approach. He asked, why not use a full-sized television screen to display a map of the entire earth with hot spots that reflected breaking hard news events that might be captured by amateur shooters? (This happened as anti-authoritarian demonstrations were breaking out across the Middle East in early 2011). Instead of being a "Lean Forward" experience (something that requires user input or interaction, such as a video game) this would be a "Lean Back" experience, in which the viewer could sit on the couch and take in the video. Giacomo also considered how video could be differentiated on the global map with different sized or colored markers, and how "likes", social networks, or newspaper articles could determine what appeared on the screen. He called it "WorldTV".

There was clearly some overlap between our ideas, and we decided to team up for the final project. We expanded the concept to include not only video from breaking news in other countries, but also cultural events (festivals, parades) and entertainment (sports, performances, etc.). The social filter would not only display streaming/recent videos from one's social circle, but could also reflect the collective interests of the social circle.

An additional requirement for the final project was a business model. I had already been thinking about using phone and laptop cameras as a way for ordinary people to access amateur expertise all over the globe, for a price. Examples of amateur expertise might be a power user demonstrating how to use a new gadget, advice on registering a company in a certain state by an experienced business owner, practicing foreign language conversation with a native speaker, etc. I dubbed the scheme Real Time Requests. (RTR). A live auction and reputation system would determine prices paid by people seeking expertise, and match them up with sellers. We decided to fold it into the proposal. The idea was then debuted at another MAS 571 poster session in April: 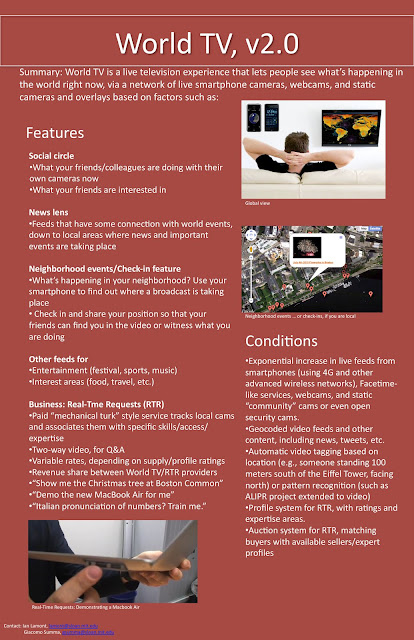 Jungmoo, who had a background as a professional television reporter for a Korean broadcaster, was intrigued by our poster session presentation and joined the team. Our next task was to take the concept and make a demo to show at demo day at the MIT Media Lab in the last week of class in May. For the final deliverable, we didn't have the skills to produce a working prototype. However, we did have the skills to produce a software mockup and accompanying video demo.

The team got to work. I created a simple WorldTV television UI using HTML and CSS, built the maps with Google Earth, and mocked up a mobile UX on an iPhone "remote". Giacomo wrote the script and starred in the video. Jungmoo took the raw video and graphics and used his professional editing skills to create a really slick video demo, which is shown below:

We presented the video and an accompanying slideshow on the business model last month at the Media Lab. Our Media Lab instructors, Marie-José Montpetit and Henry Holtzman, invited a group of industry pros from major cable and national broadcasters (including NBC and WGBH) to watch all six student presentations. After seeing our team present, one of the NBC visitors was interested in the idea of "shared experiences." Giacomo explained that user-generated video around sporting events and concerts could populate the global view, depending on how one's filters were set up. This prompted another executive, who I believed was from HBO, to question the legality of using amateur concert video. I responded that copyright law was decades behind the technological and social reality, but she was skeptical. I then said that there would always be artists who want to exercise strong control over this content, but there were also many artists who recognized the value of fan content to generate additional interest or loyalty, and in my opinion, the latter group would have a competitive advantage. But as I thought about it later, it was clear that addressing the entertainment industry's copyright concerns would be a huge issue, regardless of how outdated the laws are.

Our team also heard from Henry, who thought the Real Time Requests business model was really a separate concept that did not match WorldTV. We agreed. Jungmoo and Giacomo had actually raised the same concern in our planning discussions, but I felt we needed a business model that did not involve standard subscriptions. Henry noted that a subscription might actually work for some people.

So what's next for WorldTV? All members of the team have graduated, and none of the industry visitors seemed interested in taking it further. We hope, however, that if our paper is accepted to the IEEE CCNC '12 conference, it might get some traction. In the draft that we are now preparing, I outlined the "Future Work" required to make WorldTV a reality:


The next steps for WorldTV would be to create a working prototype using Google Earth, YouTube and Facebook APIs, the Android or iPhone SDKs, and other existing software and hardware components. Besides using the prototype to evaluate functionality and performance, ordinary users in the target audience (people having global networks) could also test the system with an eye toward determining which features and use cases hold the most promise. When the product is ready for wider distribution, identifying suitable “TV App” platforms and partnerships could take place. In the long run, creating a scalable architecture with its own API and opening up WorldTV to outside developers (much like Facebook and Twitter have done) would help unleash the greatest potential of the platform. This would require significant investments, but in the long run would help realize innovations for the next age of television.

If the paper is published, I will share a link on this space. In addition, if anyone is interested in learning more or helping to develop the idea, my contact information can be found here.
Posted by I Lamont at 6/27/2011 01:12:00 AM