Rules for photography in public: The ACLU view 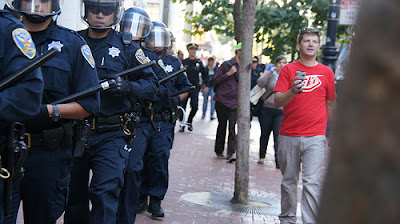 The ACLU has a great page that explains what's allowed and what's not when it comes to taking photos and video in public places. It's an issue that's very important to anyone living in a free and open society, but is especially important now, considering nearly every mobile phone sold today has a digital camera buit in, and most of them can also take video (even my low-tech Nokia handset that came for free with my AT&T prepaid plan can shoot video, albeit at 128x96). The result is anyone with such a phone can photography anything or video any event that they happen to witness, whether it's mundane or extraordinary. Not everyone appreciates being photographed/videoed, however, and there is always a worry about getting in some sort of trouble for taking photographs. What are our rights?

The ACLU page lays it out very clearly. In terms of photography:

If you are stopped or detained for taking photographs:


If the officer says no, then you are being detained, something that under the law an officer cannot do without reasonable suspicion that you have or are about to commit a crime or are in the process of doing so. Until you ask to leave, your being stopped is considered voluntary under the law and is legal.

The underlined emphasis is mine. I was not aware of these issues until I read this page, and the phrase "Am I free to go?" is one worth remembering. Note also that not all officials (including police) understand the law when it comes to taking pictures in public places.

It's also worth remembering that public spaces include streets, parks, and many other exterior spaces. Further, these rights don't only apply to photographing police, but also anyone who happens to be in them. While someone may demand that you "put that camera down" or "stop taking pictures of me" and you are in a public space, you are legally within your rights to keep shooting -- although the polite thing to do may be different.

When it comes to shooting video, however, wiretapping laws have clouded the picture, and have been abused by police in Massachusetts and other states. Stories of people videoing an arrest on the street or even from their own property only to be arrested themselves have become disturbingly commonplace, and has a chilling effect on public behavior. There are signs the courts are coming around, but in the meantime reading the ACLU's take is helpful for understanding what's at stake:

With regards to videotaping, there is an important legal distinction between a visual photographic record (fully protected) and the audio portion of a videotape, which some states have tried to regulate under state wiretapping laws.


As for the question of whether it's OK to photograph or video the TSA, the answer is yes you can, as long as you are not interfering with the screening process or taking photos of their baggage scanner screens. Read the ACLU page for more information.

You may also be interested in some other blogging I've done, including: